The nationally vulnerable Hutton's shearwater is the only seabird globally to breed in a sub-alpine environment.

From an estimated population numbering millions of birds, introduced mammals and changes in land use have decreased the Hutton’s shearwater (Puffinus huttoni) population to less than half a million.

There is an estimated breeding population of more than 100,000 pairs, with a similar number of non-breeding birds visiting colonies early in the breeding season.

Despite this relatively high number the species is regarded as nationally endangered because of past declines (evident from extinct colonies) and the threats still faced.

The Hutton's shearwater/tītī was long known to Māori, providing a major sustainable source of protein to Ngāti Kuri. Chicks were harvested from their burrows shortly before fledging and preserved in pōhā/kelp bags.

The Hutton’s shearwater was first officially described in 1912, and later there were anecdotal reports from highcountry farmers, hunters and various others of 'muttonbird' burrows at high elevations in the Seaward Kaikoura Range, behind Kaikoura. In 1965, following on from these leads, Geoff Harrow found carcasses in the headwaters of the Kowhai River at altitudes between 1,200 and 1,800 m above sea level, that were confirmed as Hutton's shearwaters.

Extensive searching led to the confirmation of eight colonies, but only two remnant colonies remain today. At least ten colonies formerly existed in both the Seaward Kaikoura and Inland Kaikoura Ranges; there is questionable evidence that the species may have bred beyond these mountains.

The distribution of Hutton’s shearwaters within New Zealand waters is poorly understood as few at-sea observers attempt to distinguish Hutton’s shearwaters from the similar fluttering shearwater. There are sightings and beach-wrecked birds from Northland to Foveaux Strait, including East Cape and Westland, though it is apparent that the bulk of the population stays between Cape Campbell and Banks Peninsula, off the north-east coast of the South Island, when breeding.

During the breeding season (August to March), Hutton’s shearwaters are present over the inshore coastal waters off Kaikoura. They fly low over the water and congregate in large flocks (rafts) before their evening flights to the mountain colonies.

Nesting occurs at the two remaining colonies in the Seaward Kaikoura Range, on steep tussock-covered slopes above 1,200 m altitude. The colonies are located in the Kowhai River catchment in Uerau Nature Reserve; and at Shearwater Stream in Puhi Peaks Nature Reserve (private  property and QEII covenant).

Outside the breeding season Hutton’s shearwaters are migratory and most are absent from New Zealand waters. Adults fitted with geo-locators revealed details of their winter migration to Australia, where birds spend the non-breeding season feeding in warm fish-rich coastal waters, never making landfall.

Hutton's shearwater chick covered in down prior to gaining adult plumage

The Hutton’s shearwater is one of the few New Zealand seabirds to solely breed on the mainland. Birds arrive at their alpine colonies from late August onwards, then spend two months competing for burrows and mates. Burrow densities vary within sub-colonies, and the average burrow is 3 m long.

The peak of egg-laying is in early November, with each pair producing a single egg. The 50 day incubation period is shared by both sexes, with a nestling period of 75-94 days. Hutton’s shearwaters have a longer chick-rearing period than other Puffinus species, this may be due to difficulties in obtaining sufficient food or the energetic costs associated with a colony 1,200 m above sea level.

Each day adults travel approximately 20 km to sea, to feed on fish and krill which are later fed to their chick.  On their downhill flight they travel at up to 154 km/h, reaching the ocean in as little as seven minutes. The return trip takes around 38 minutes, with 1,200 m or more in altitude to be gained with a belly full of fish.

Upon fledgling (mid-March to early April) chicks migrate with other Hutton’s shearwaters to the fish-rich coastal waters off Australia. Immature birds remain there until returning to Kaikoura to breed at 3-4 years of age

Hutton's shearwater killed by a stoat

Habitat loss and predation by introduced mammals is the main threat to remaining Hutton’s shearwater populations. Feral pigs are considered a major threat, being responsible for the loss of colonies in the last 100 years. Deer and chamois are known to trample nesting burrows, while stoats and cats will eat young birds and eggs.

Both of the remaining breeding colonies are confined to a small area, making the birds extremely vulnerable to events such as landslides or predation which could lead to extinction. 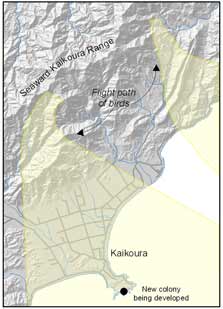 A third colony (Te Rae o Atiu) was established on the Kaikoura Peninsula in 2005, to ensure long-term survival. This was a joint project by Te Runanga o Kaikoura, Whale Watch Kaikoura and DOC, with support from Forest & Bird and the local community.

A predator-proof fence was then constructed by the Hutton’s Shearwater Charitable Trust in 2010. Multiple translocations occurred, with chicks transferred from mountain burrows to artificial burrows at the new colony.  Volunteers hand fed chicks for a 2-3 week period, until they fledged. During this time the chicks ‘imprinted’ on the site, ensuring they would return to the new colony to breed. Chicks raised there are already returning and producing their own offspring.

10 year assessment on the status and conservation of Hutton's shearwaters (PDF, 275K)

Hutton’s shearwater feed on fish, so are vulnerable to becoming tangled in set nets and drowning. Fishers can help protect the seabirds by monitoring set nets closely.

Like many nocturnal seabirds, young Hutton’s shearwaters become disoriented by bright lights when they fledge from their mountain colonies and fly to sea from mid-March to early April. Many crash land around the Kaikoura township during overcast weather, becoming stranded on the ground. The Hutton’s Shearwater Charitable Trust and DOC rely heavily on volunteers to assist in collecting crash landed birds for release.

Kaikoura residents and others can help to reduce the loss of young birds from mid-March to early April by:

Visit a nesting Hutton's shearwater colony in this Meet the Locals video.

Visit a Hutton's shearwater breeding colony in this Meet the Locals video.