Skip to content
Eucalyptus with bright yellow powdery eruptions on both sides of the leaves
Image: MPI | ©

A new online training programme has been launched to help the public identify myrtle rust at home.

Biosecurity New Zealand (part of the Ministry for Primary Industries) and DOC have launched an online training programme to help New Zealanders identify suspected myrtle rust infections in their backyards.

The plant fungus can be hard to identify without training and can look different during seasonal changes. The new online training modules provide resources to better understand the fungus and its symptoms.

“The courses are available to everyone and cover how it spreads, what to do if you find it and climatic factors that influence myrtle rust,” says Biosecurity New Zealand’s Manager for Recovery and Pest Management, John Sanson.

The courses can be found on the myrtle rust website, a site developed by Biosecurity New Zealand and DOC that provides guidance for people that are interested in learning more about myrtle rust in New Zealand.

“We are trying to understand the spread of the disease so are asking staff and the public to keep an eye out for myrtle rust over the autumn months,” Mr Sanson says. 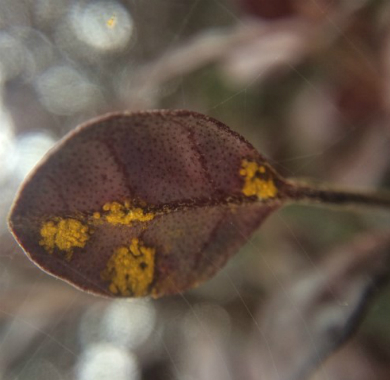 New Zealand’s precious native myrtle plants including pōhutukawa, rātā, mānuka, kānuka and ramarama are vulnerable to the disease. The fungus, which is mainly spread by wind, generally infects shoots, buds, and young leaves of myrtle plants. Infected plants show typical symptoms including bright yellow powdery spots on the underside of leaves but can also show other symptoms such as grey powdery spots during the cooler months.

DOC’s Project Manager for Myrtle Rust, Fiona Thomson, says the website is an excellent tool for the public to learn what myrtle plants look like, how to spot myrtle rust and what to do when you find infected plants.

“The more eyes looking out for myrtle rust, the better we can monitor this disease and protect our precious myrtles”, says Dr Thomson.

If you think you see symptoms of myrtle rust, especially in areas where it has not yet been found, remember to not touch the plant or collect samples, but take pictures and report it to Biosecurity New Zealand’s Exotic Pest and Disease Hotline on 0800 80 99 66.

The fungal plant disease myrtle rust (Austropuccinia psidii) was discovered on Raoul Island in the Kermadec group of islands in April 2017. It was later confirmed on mainland New Zealand - at a Kerikeri plant nursery on 3 May and at Waitara, Taranaki, on 17 May 2017.

Myrtle rust threatens the Myrtaceae plant family, including some of our most iconic indigenous plants - pōhutukawa, rātā, mānuka, kānuka, and ramarama, as well as exotic myrtles like guava and eucalypts.

A map of areas where myrtle rust has been found in New Zealand and resources on what to look for, what to do if you find myrtle rust and how to manage it are available on the offical myrtle rust website.

As at 4 March 2019, myrtle rust has been confirmed on 937 properties across most of the North Island and upper areas of the South Island.

Taranaki, Auckland and Bay of Plenty are the most seriously affected areas. Moderate levels of infection are recorded in Northland, Waikato, Manawatu-Whanganui, and Wellington. Lower levels of infection have been confirmed in Tasman, Nelson, Marlborough and Gisborne.

Most infections so far have been found on garden cultivars of our native ramarama (from the genus Lophomyrtus). Ramarama is often planted in domestic gardens as a hedge.

Photo diagnosis of myrtle rust finds notified through Biosecurity New Zealand’s biosecurity hotline continue to take place so we can continue to monitor spread and impacts across New Zealand and identify new hosts.

Myrtle rust is a wind-borne fungal disease that can infect taonga species such as mānuka, pōhutukawa and rātā.