A record number of hihi or stitchbird have fledged on pest-free Tiritiri Matangi Island in the Hauraki Gulf Marine Park during the latest breeding season. 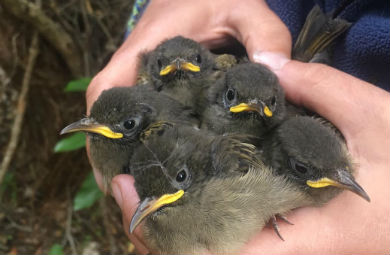 Hihi breeding on Tiritiri Matangi starts in late September and runs until February.

This breeding season 252 new birds were added to the hihi population on Tiritiri Matangi.

That beats the previous record of 241 hihi fledged on the island during the 2010 / 2011 breeding season.

“Conditions have been ideal for hihi on Tiritiri Matangi this summer and breeding pairs on the island have produced a record number of new birds,” says Hihi Conservation Charitable Trust (HCCT) Conservation Officer Mhairi McCready.

“Around 150 fledgling hihi are produced in an average breeding season on Tiritiri Matangi so this is a fantastic result for this nationally vulnerable native bird.”

“It’s also a reward for the volunteers, research students and others involved in supporting the hihi during the breeding season,” says Mhairi McCready.

Hihi were once found throughout the North Island and on a number of islands, but had disappeared from mainland North Island by the mid-1880s due to introduced predators such as rats and cats, diseases spread by introduced birds and habitat loss.

In the 1890s, the last surviving hihi were found on only one island, Te Hauturu ō Toi / Little Barrier Island, in the Hauraki Gulf.

Efforts to bring hihi back from the brink of extinction began in the 1980s. Hihi from Te Hauturu ō Toi / Little Barrier Island were released on other islands, including Tiritiri Matangi in 1995. This translocation was a great success and hihi have thrived on Tiritiri Matangi.

“The success of the hihi breeding programme on Tiritiri Matangi is due to a lot of hard work by DOC, Supporters of Tiritiri Matangi, the HCCT and research institutions,” says HCCT Trustee Dr John Ewen, who is a Senior Research Fellow at the Zoological Society of London.

“We use the best science-based methods and work together to drive recovery of this little known taonga species,” says Dr Ewen.

The hihi population on Tiritiri Matangi is very important to the national recovery programme for the species. Most of the new populations of hihi, established at other pest-free sites, began with translocations of birds from Tiritiri Matangi.

“Going from one hihi population to seven proves that with dedicated effort we can recover native species from the brink of extinction,” says HCCT Trustee and DOC Technical Advisor Lynn Adams.

“Hihi are still a threatened species. We continue to support existing populations and are looking to establish new populations at pest-free sites where hihi are safe to breed.”

“A core value of our recovery efforts is to reconnect New Zealanders with this charismatic and colourful native bird. Having more hihi flying around in more places will help re-establish this ‘ray of sunshine’ as a bird every New Zealander knows,” says Lynn Adams.

HCCT was founded in 2018 with the charitable purpose of:

For more information about hihi and hihi conservation visit:

Stitchbird/hihi is a medium-sized forest species that is one of New Zealand’s rarest birds.

Tiritiri Matangi is rich in Māori and European history with one of the most successful community-lead conservation projects in the world.