Stitchbird/hihi is a medium-sized forest species that is one of New Zealand’s rarest birds.

In pre-European times, hihi were found throughout the North Island and on several islands such as Great Barrier, Little Barrier (Hauturu) and Kapiti. Sadly the species became extinct on the mainland with the last recorded sighting in the Tararua Ranges in 1883.

Habitat loss, the introduction of mammalian predators such as cats and rats and specimen collection probably contributed to the decline of hihi on the mainland. They also appear to be especially prone to the effects of diseases, which may have been introduced to New Zealand with domestic birds. 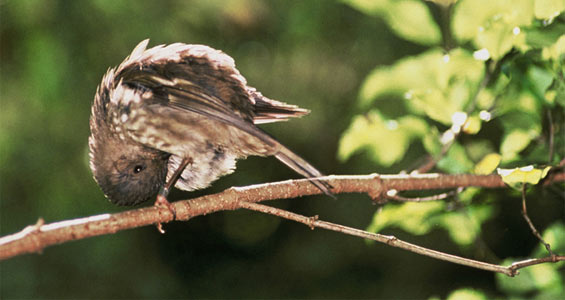 The stitchbird/hihi is one of New Zealand’s rarest birds. The female birds (pictured) have more subdued colouring and look quite different to the male birds.
Image: © Garry Norman/Mount Bruce Wildlife Centre

An active research programme with Massey and Auckland universities, as well as other institutes such as London Zoological Society and Cambridge Univeristy, has greatly increased our knowledge of hihi biology.

Hihi are also the only birds known to sometimes mate face to face.

Hihi have been found to have a fascinating and complex mating system. Males pair up with a female in their territory while also seeking to mate with other females in the neighbourhood. To ensure the chicks are his, males need to produce large amounts of sperm to dilute that of other males. And to avoid wasting this, the male has to assess exactly when a female is ready to breed. In the days leading up to laying, when a female is weighed down with developing eggs, a number of males may chase her for hours at a time, all attempting to mate with her.

Management of the captive population at the Pukaha Mount Bruce National Wildlife Centre has also contributed to understanding the role of avian diseases in managing hihi populations. Diseases such as Aspergillosis, a fungal infection of the respiratory tract, and Coccidiosis, an intestinal parasite, have been found to affect wild hihi survivial.

Current research programmes include developing a technique to measure the size of the Little Barrier hihi population and assess its health and viability. Another study, on Tiritiri Matangi, is looking at the effect of carotenoid availability on hihi health (carotenoids are used for the yellow colour in male hihi feathers and egg yolk, and are important for health).

DOC's Stitchbird Recovery Plan has a long term goal of increasing the number of self-sustaining populations of hihi to five. Important steps towards this include:

The only naturally surviving population of hihi is found on Little Barrier Island (Te Hauturu-o-Toi) in the Hauraki Gulf. Hauturu was declared a bird sanctuary in 1894 and later a nature reserve, a move that undoubtedly saved the hihi from extinction.

DOC and its predecessor, the New Zealand Wildlife Service, have carried out a series of translocations of hihi from Little Barrier Island to other secure predator-free islands. Early attempts to establish birds on Hen, Mokoia (Lake Rotorua) and Cuvier islands and at Art in the Park, Waitakere Ranges were not successful without supporting management. Later transfers to Kapiti and Tiritiri Matangi trialled new management techniques to assist the hihi to survive.

There are now small managed populations of hihi on Tiritiri Matangi and Kapiti islands, as well as Karori Wildlife Sanctuary in Wellington, Bushy Park near Wanganui, Maungatautari, and hihi have recently been reintroduced to Rotokare.

You can help by donating to the New Zealand National Parks and Conservation Foundation, and getting involved with Hihi Conservation.