A milestone in re-establishing the whitehead (pōpokotea) in the Auckland region has been achieved with the release of the protected native bird on two pest-free islands in the heart of Auckland.

A milestone in re-establishing the whitehead (pōpokotea) in the Auckland region has been achieved with the release of the protected native bird on two pest-free islands in the heart of Auckland.

Whiteheads disappeared from the Auckland mainland in the 1880s, driven out by rats, stoats and the loss of native forest.

They are being restored to the region and the release of 50 whiteheads on pest-free Motutapu and Motuihe islands on Sunday 17 June means these birds are now just 30 minutes by ferry from downtown Auckland.

The whiteheads released were captured on pest-free Little Barrier Island (Hauturu) and held in temporary aviaries. They were placed in transport boxes and flown today to Motuihe and Motutapu islands by helicopter. 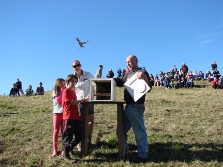 Thirty were released on Motutapu and twenty on Motuihe. The transfer was carried out by the Department of Conservation (DOC) in partnership with the Motuihe Trust and the Motutapu Restoration Trust, and in consultation with local iwi.

The 20 whiteheads released on Motuihe were released into native forest planted by volunteers organised by the Motuihe Trust.

Motuihe Trust chairperson John Laurence is thrilled to have whiteheads on Motuihe. “They’re a welcome addition to the tuatara, little spotted kiwi, kakariki and other native wildlife we’ve released onto the island since it was made pest-free in 2005.”

Motutapu Restoration Trust chair Chris Fletcher says there’s plenty of room on Motutapu and Rangitoto for a large whitehead population. “We’ve been adding to the wildlife on these islands since they were declared pest-free last year and are looking forward to having flocks of lively whitehead for the public to enjoy.”

Tīeke were almost wiped out by ship rats, stoats and feral cats. By 1964 the population of North Island tīeke had been reduced to 500 living on Hen Island in Northland.

They were saved from extinction by being moved onto pest-free islands. Today North Island tīeke live on 15 islands. The tīeke released onto Rangitoto and Motutapu last year began producing chicks just 10 weeks after their release.

DOC Auckland Area manager Jonathan Miles says creating a genetically robust, self-sustaining tīeke population on Rangitoto and Motutapu is another step in securing the future of these noted songbirds. “Having removed the animal pests we’re now able to use these islands to bring our unique wildlife to the heart of our largest city.”