Peak spawning run counts of adult trout in the upper sections of the Tauranga-Taupō, Waiotaka and Waimarino rivers have been the highest recorded since 2001/2002.

Peak spawning run counts of adult trout in the upper sections of the Tauranga-Taupō, Waiotaka and Waimarino rivers have been the highest recorded since 2001/2002.

“This is a very positive sign for the fishery”, says Taupō fishery ranger Ray Bond, “the number of spawning trout has been close to double the peak counts of recent years”. 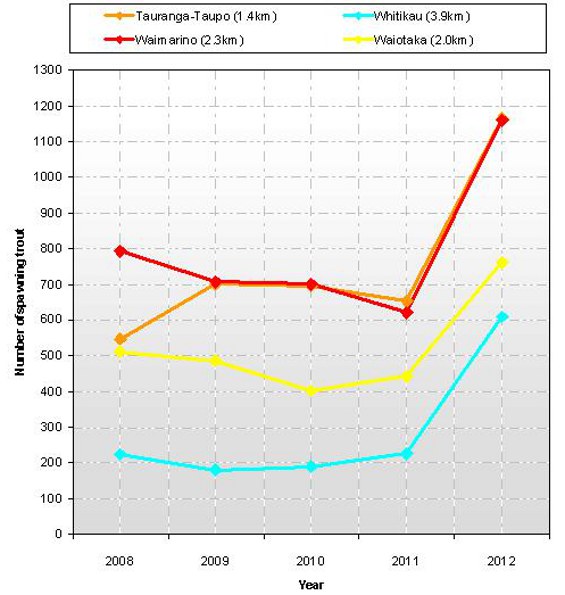 The Department of Conservation (DOC) has been using drift dive surveys to monitor the number of adult spawning trout in the tributaries of Lake Taupō since the 1990s. The number of trout migrating to the upper section of a river, closed to winter angling, is monitored to identify trends in the size of the mature trout population returning to spawn from year to year. The information gathered is used in conjunction with other monitoring programmes to ensure the number of trout running the rivers to spawn is sufficient to provide for both satisfactory winter angling and successful recruitment of juvenile trout to the fishery.

Drift dives are undertaken monthly each year from July until November. Normally, spawning counts are low during July and slowly increase over the winter months before peaking during October. “Many of the earlier dives had to be postponed due to flooding or poor visibility, however the last few dives were able to be completed and the highest peak counts we’ve recorded in 10 years” says Mr Bond. The increase in the number of spawning fish is also reflected in the data collected through the Waipa Steam fish trapping operation. “We are heading for the highest count of spawning trout in Waipa trap since 2007” says Mr Bond.

Anglers are reminded that the upper reaches of the Taupō rivers re-open to fishing on 1 December through until 31 May. Please check the map on the back of your Taupō fishing licence for more information. With good numbers of trout still spawning in the upper reaches of the rivers, there should be plenty of angling opportunities available to those seeking something a little different.

Remember to CHECK, CLEAN and DRY when moving between waterways.