People visiting parks and reserves in the Wairarapa are warned to be wary of wasps, with the height of the wasp season approaching. 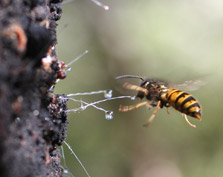 People visiting parks and reserves in the Wairarapa are warned to be wary of wasps, with the height of the wasp season approaching.

DOC visitor assets programme manager Garry Foster says the public need to be aware of the existence of the wasps which can be aggressive.

"At this time of year wasps' nests are found in sunny spots such as banks which can be close to streams or rivers," says Garry Foster.

"The life cycle of wasps means that numbers are at their peak between February and April while the queen is hatching young eggs. They can be quite aggressive and discretion is advised."

Social wasps are an introduced pest which pose a threat to urban, rural and natural ecosystems here. There are four species in New Zealand with German and common wasps (vespulid) being the problem in the Wairarapa at the moment.

Allergy New Zealand recommends wearing footwear when outside and covering up as two ways of avoiding being stung.

While DOC manages the control of wasps on conservation land they are not responsible for their management on other property. If you come across a wasp nest, near a track, picnic area or any other recreational facility in the Wairarapa contact the Department of Conservation +64 6 377 0700 with the details.