The popular Mavora Lakes campsites will be fully operational by Tuesday 23 October 2012 with Department of Conservation (DOC) rangers at the site periodically over the busy summer months. 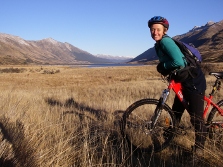 The popular Mavora Lakes campsites is now fully operational, with Department of Conservation (DOC) rangers at the site periodically over the busy summer months.

Mavora Lakes are a great place to enjoy the outdoors. For several years however there has been a problem with damage to the area by some 4WD users, but thanks to public support, recent vandals have been identified and are being prosecuted by Police.

Te Anau’s visitor assets manager Annie Wallace said DOC would like to thank the public for their help addressing this vandalism.

“It’s great to have people pull together and work with DOC to protect these public places," she said. “Being able to take your horse for a ride and your dog camping is a real advantage of this area. It is important that all users respect the area so that it remains a great place for all to use”.

Over the last few years, DOC has provided a variety of basic, self-registration camping areas at South Mavora Lake and near the south end of North Mavora Lake. This year fire drums and barbeques will also be provided and DOC requests that people use these as open fires are banned from early October due to the ‘Restricted Fire Season’.

Over the busy Christmas period there will be extra conservation rangers present to assist with management of the area and monitor activities around Mavora.