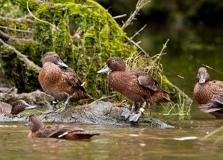 The discovery was made by Department of Conservation (DOC) staff during a monitoring and stoat trapping trip, at Lake Ada in the Arthur Valley, on the Milford Track.

DOC Ranger Erina Loe said three pāteke were seen in the water and one looked younger with ‘fluff’ around the face. “I got up close, which is unusal because adult pāteke will typically dive or fly away when approached like this. Two birds dived, but the younger looking one hopped onto a nearby bank”. Ms Loe was able to see both legs of the pāteke clearly and they were unbanded.

Pāteke were first released into the Arthur Valley in March 2009 and to date one hundred and thirty nine pāteke have been released into the area. All birds are fitted with ‘bands’ on their legs to assist with identification and monitoring. The fact that this individual is unbanded is evidence of their successful breeding.

Pāteke were once New Zealand’s most abundant waterfowl. However a combination of predation, loss of habitat and cross-breeding with mallards and grey ducks, meant numbers declined to a low of approximately only 660 birds in 2001. Over the past few years their numbers have increased through a number of successful releases and predator control in natural sites. There are now approximately 2000-2500 individuals.

DOC Biodiversity Ranger Andrew Smart said this was a considerable milestone in the Fiordland re-introduction programme. “The pāteke releases into the Arthur Valley are the only releases currently occurring in the South Island. It is likely that we have had additional successful breeding over this summer and that the young birds will become more obvious on future monitoring trips”.

This project is a partnership between Banrock Station Wines/Ducks Unlimited, the Fiordland Conservation Trust, Ultimate Hikes, the Otago Community Trust and the Department of Conservation.  “The combined support from these organisations is proving to be a great success” Murray Willans, Chairman of the Fiordland Conservation Trust said.  “It is really neat to confirm that pāteke are breeding in Fiordland. They’ve had some rather ‘testing’ weather conditions to contend with, along with mast events which potentially increase the threat of pests”.

Pāteke Recovery Group Leader Andrea Booth said this is a great example of DOC and the community working together on the recovery of pāteke. “This national programme is dependant on this joint approach, with many contributors including the captive breeders, community groups, and sponsors”.

Pāteke were once relatively common in Fiordland but have been decimated mainly by stoats. Through ongoing predator control and releases they are starting to make a comeback. “We hope to see more ducklings in the near future and secure this species once again in Fiordland” Mr Smart said.

The goal of this project is to establish a self-sustaining population of pāteke in the Arthur Valley. A further seventy-five pāteke will be released in late February. The Arthur Valley is part of the Milford Track and with continued breeding Milford Track walkers should be able to see pāteke regularly in the future.