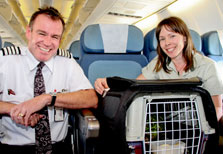 The partnership is worth the equivalent of $1 million annually to DOC through travel and marketing support for new conservation programmes around the National Parks Great Walks network, species translocations around the country and in promotion of the Great Walks themselves.

The announcement was made at an event at Air New Zealand’s Auckland head office also attended by Minister of Conservation Kate Wilkinson, DOC Director-General Al Morrison and Air New Zealand and DOC staff.

“It will enable important conservation biodiversity projects to take place in the vicinity of the Great Walks and also help promote these gems in New Zealand’s natural tourism crown to domestic and international tourists like never before.”

“There are approximately 200 transfers each year of threatened wildlife and just this past week Air New Zealand helped fly eight flightless kakapo from Invercargill through Christchurch to Auckland en route to their new sanctuary on Little Barrier Island in the Hauraki Gulf,” said DOC Director-General Al Mr Morrison.

“This is a natural partnership with a forward thinking company that sees the real value of conservation. Air New Zealand understands that looking after the things that make New Zealand unique is good for their business.

“Whether it is help transporting threatened species or getting more people out experiencing the value of our National Parks, Air New Zealand will be investing in its own future as well as New Zealand’s,” says Mr Morrison

“This exciting opportunity builds on our ongoing focus on reducing our environmental footprint and engaging with, promoting and protecting New Zealand’s natural assets through the likes of the Air New Zealand Environment Trust, Kids Restore New Zealand and the efforts or our 3,000 strong employee Green Team.”

Mr Fyfe this afternoon also revealed plans for a global competition labelled “The Great Walker” which will launch in two months, giving one person from anywhere on the planet the opportunity to come to New Zealand and take on the challenge of completing all nine Great Walks in nine weeks.

The airline plans to launch the search through its significant global social media and marketing channels and have the winner share their experiences through the same channels.