The winner of New Zealand's premier conservation award, the Loder Cup, is Shannel Courtney, who is a threatened plant technical support officer with the Department of Conservation. 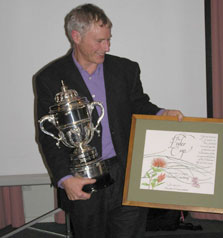 The Loder Cup winner for 2008 is Shannel Courtney, a threatened plant technical support officer in DOC’s Nelson/Marlborough Conservancy office. The award recognises his personal and professional commitment to protecting, restoring and promoting indigenous plant life, particularly in the Nelson and Marlborough regions.

In presenting the award to him, the Minister of Conservation, Hon Steve Chadwick said, “Shannel is known for his work as a botanist, field ecologist, researcher and mentor. He is incredibly knowledgeable about New Zealand’s indigenous plant life, he generously shares his knowledge to help others, and his commitment goes beyond what he’s paid to do in his job with DOC.”

One of Shannel’s achievements is completing baseline botanical surveys to create a comprehensive range of plant species lists that covers the majority of the two million hectares of national parks, reserves and other public conservation land at the top of the South Island.

Shannel also supervised the establishment of the Nelson herbarium and collected most of the plant species in the herbarium, creating a great resource for amateur botanists in Nelson.

The Minister said that awarding the Loder Cup to Shannel was an easy decision, not only because of his many achievements but because the support for Shannel’s nomination came from respected leaders in the plant conservation community.

The Royal Forest and Bird Protection Society nominated Shannel for the Loder Cup.