Report any sightings of skinks and geckos in the alpine zone of South Island mountains.

We are very keen to learn of any sightings of lizards in the alpine zone of South Island mountains – the area above the tree and shrub zones.

Send us your photos and location information

If you have seen a lizard in the alpine zone, we would like to hear from you. Send us:

Send your information to:

Alpine skinks and geckos have been recently discovered in the Fiordland area and in the Nelson Lakes area. We need your help to better understand their distribution and ecology.

The 'Awakopaka skink' was discovered up at 1200 m near Homer Saddle in January 2014. Only one individual has ever been seen.

We are extremely interested in photos of, and exact location information for, alpine skinks and geckos in the Darran Mountains. Particularly in the region of Homer Saddle. 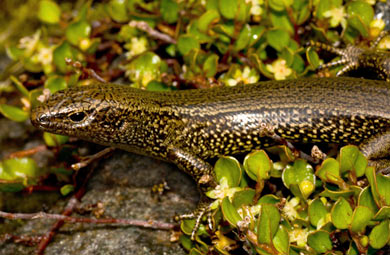 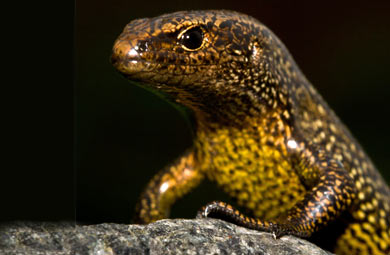 The 'Cupola Basin gecko' is known from only two individuals in Nelson Lakes National Park. One sighting was from Cupola Basin in the Travers Valley and the other from the Sabine Valley. Recent targeted surveys have failed to find more geckos.

'Black-eyed geckos' have also been seen in the alpine zone of Nelson Lakes. 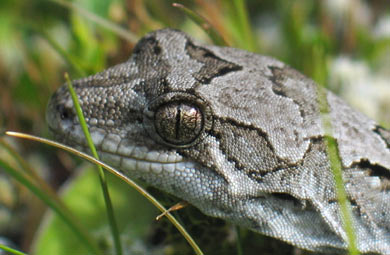 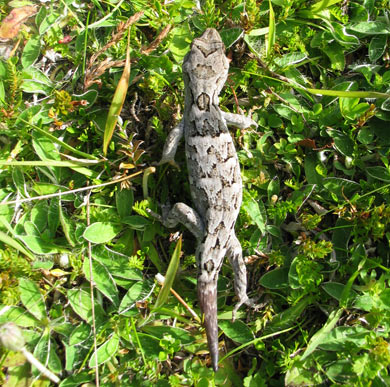 Alpine geckos are relatives of the forest gecko.

While forest geckos live in trees and shrubs and are quite common in the west and north of the South Island (and in the North Island), these newly discovered geckos occupy a very different habitat – alpine rock bluffs, boulder piles and screes above 1000 m.

These alpine geckos seem to be extremely rare. They are very variable in colour and pattern, from drab brownish grey to bold herringbone and chevron patterns, to the whole animal being virtually covered in blotches of orange and yellow. All have bright orange colouring inside the mouth, which distinguishes them from the more common varieties of gecko.

We would like to know about any unusual sightings of geckos from the mountains.

Other areas of interest

We would like assistance from alpine climbers and trampers particularly in these areas:

Report a reptile or frog sighting

Use the Amphibian and Reptile Distribution Scheme (ARDS) cards to report sightings of amphibians and reptiles, and help us build our database.

Learn the important features of skinks and geckos, and how to take useful photos to help identify them.