Common dolphins found in New Zealand waters belong to the species now known as the short-beaked common dolphin. The colouration of this dolphin is very distinctive with a criss-cross or hour-glass type pattern centred on the flanks. Colours include purplish black, grey, white and yellowish tan. The dorsal fin is high with a concave hind edge. The head is low and smooth-sloping.

Short-beaked common dolphins are found in waters throughout New Zealand and Australia. In New Zealand, this species tends to remain a few kilometres from the coast and is particularly common in the Hauraki Gulf and off Northland.

Common dolphin leaping out of the water, seen during a whale survey, Cook Strait Area

Common dolphins may form enormous schools of several thousand individuals. They are also known to associate with schools of pilot whales and other dolphin species such as dusky dolphins. This species is abundant but precise population estimates are largely unknown.

Common dolphins feed on a variety of prey, including surface schooling fish species and small mid-water fish and squids. They are known to dive to depths of 280 metres in search of prey and hunt cooperatively within schools. Dives can last up to 8 minutes but are usually between 10 seconds and 2 minutes. These animals are vocal and show a wide range of acrobatic behaviour.

Gestation lasts for around 10-11 months and the calving interval varies from 1 to 3 years. Age at sexual maturity is estimated to vary with region but for the Pacific is thought to range from 7-12 years for males and 6-7 years for females. Maximum age is estimated to be 22 years.

Killer whales are the principal predators of common dolphins. When under threat individuals can be seen moving closer together. Dolphins have also been spotted with shark-bite scars indicating that sharks may predate on this species.

Large numbers of short-beaked common dolphins die in tuna purse seine fisheries in the eastern tropical Pacific and in set net fisheries around the world. In New Zealand common dolphins are caught in trawl fisheries each year. Tourism activities have also been found to affect the normal behaviour of these dolphins and studies have shown them attempting to avoid approaching vessels through the use of evasive behaviours (Au & Perryman, 1982). Boat strike is also a threat in areas of high boating activity such as in the Bay of Islands. Again, common sense rules should apply when boating around these dolphins to reduce stress on the animals. Such rules are outlined in the Marine Mammal Protection Regulations (1992).

We are assessing the impacts of tourism on common dolphins in the Bay of Islands and is using photo-identification in the Bay of Plenty to study their population ecology. Future assessment will look at the effects of developing marine farm operations.

We are also responsible for managing stranding events.

You can report sightings of dolphins to our conservation hotline 0800 DOCHOT (0800 362 468). You can also report a sighting online.

Reports of sightings are always valuable and help increase our knowledge of dolphin distribution and movements around New Zealand.

If you need help identifying species, download the marine mammal sighting form (PDF, 416K) (Word, 4,300K). You can use the images and descriptions to find out which species of dolphin you observed.

Include as much information as possible with your sighting:

How to approach dolphins

From a commercial or recreational boat:

From a recreational boat or swimming:

Call DOC's emergency hotline immediately 0800 DOC HOT (0800 362 468) and follow any instructions from DOC staff. Prompt reporting increases the likelihood that we can save dolphins in distress and learn more about deceased dolphins, including conducting necropsies in some situations to identify the cause of death and to collect important scientific data that may help us manage threats to dolphins.

How you can help in a stranding.

If you catch or harm a dolphin

It is not illegal to accidentally catch a dolphin, but you must report it.

If a dolphin is alive you should release it back into the water as quickly and gently as possible, provided it is safe to do so.

If the dolphin is dead, take photos, and either release the carcass at sea or preferably bring it to shore for us to recover, particularly if you have caught a Hector's or Māui dolphin.

Find out more about sharing our coasts with marine mammals.

If you are set netting always remain with your net. Remove your net from the water if dolphins are seen in the area. 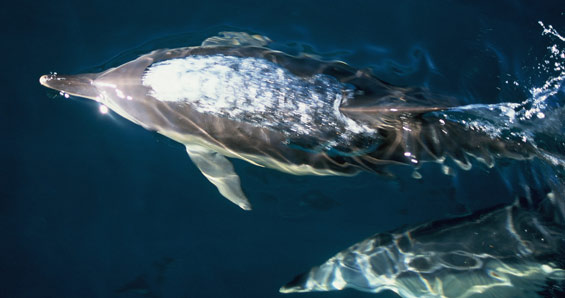