The paradise shelduck is New Zealand’s only shelduck, a worldwide group of large, often semi-terrestrial waterfowl that have goose-like features.

Unusually for ducks, the female paradise shelduck is more eye-catching than the male; females have a pure white head and chestnut-coloured body, while males have a dark grey body and black head.

Paradise shelducks are commonly observed flying in pairs or grazing on pasture. They are very vocal birds, with males giving a characteristic ‘zonk zonk’, while females make a more shrill ‘zeek zeek’ while flying or as a warning to intruders. 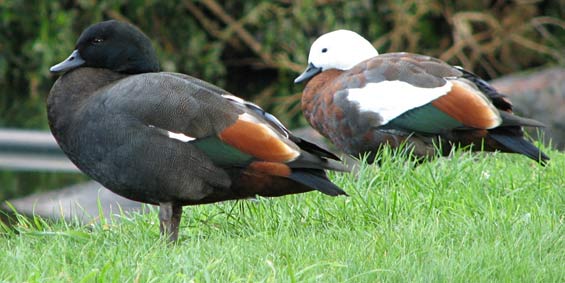 The female (background) is more eye-catching than the male

Where to find them

Paradise shelducks breed only in New Zealand and are widely distributed in pasture, tussock grasslands and wetlands throughout the mainland and offshore islands.

Unlike other native duck species in New Zealand, the paradise shelduck has benefited from the extensive human modification of natural landscapes throughout the country.

Paradise shelducks were uncommon and declining during the nineteenth century due to over-hunting, but they have increased throughout the country since then.

Stricter regulations on hunting, the creation of numerous stock ponds, and the conversion of native forest to pasture have all helped the paradise shelduck.

Paradise shelducks first breed in their second or third year and pairs stay together for life and return to the same nesting area year after year.

They nest under logs, in holes in the ground, in haysheds and occasionally in tree holes up to 25 metres off the ground. They lay one clutch of up to 10 eggs per year in August or September.

The female incubates eggs for about one month, during which time she leaves the nest two or three times each day for about an hour at a time to get food. After the eggs hatch, the male and female share the parenting.

Ducklings are covered in brown and white down when they are born, but by the time they fledge at eight weeks, they resemble adult males. The female fledglings have white patches around their eyes and bill, which will expand to their entire head after a few months.

Australia has its own shelduck species, the chestnutbreasted shelduck. This shelduck occasionally finds its way to New Zealand, where it was first recorded in 1973 at Hokitika.

Small invasions occurred during the 1980s, with flocks of up to 22 birds recorded throughout the North and South Islands and our sub-Antarctic islands.

Today the Australian species maintains a tenuous hold in New Zealand, with perhaps fewer than 20 birds remaining, mostly in Marlborough.

While paradise shelducks are widespread and common, periods of local decline sometimes occur because of over-hunting.

Introduced predators and the draining of wetlands are also threats to paradise ducks, although these dangers are, in most cases, outweighed by the large amount of pasture and grassland habitat available to them.

You can help protect the paradise shelduck by adhering to your local hunting regulations, and by reporting any misconduct to your local Fish & Game office.

Keeping wetlands free of pollutants and stock will help ducks as well as many other native species.

More information about hunting permits and restrictions can be obtained from your local Fish & Game office.

You need a game bird licence from Fish & Game New Zealand and a game hunting permit from DOC to hunt game birds on public conservation land.