The at risk Baillon's crake/marsh crake/koitareke is an endemic subspecies which inhabits wetlands throughout New Zealand.

The marsh crake (Porzana pusilla affinis), or koitareke as it is known to Maori, is one of the most secretive New Zealand birds, largely because it inhabits dense wetland vegetation, rarely ventures into the open and usually only calls at dusk and through the night.

These small rails are half the size of the common blackbird but have spectacular plumage. They appear stout or dumpy because of their short tail and relatively long legs for their body size. The upper parts are rich chestnut-brown with flecks of black and white, the under parts are grey with black and white bars towards the flanks, the eye is bright red, the beak green and the legs olive. Very little is known of their ecology.

Marsh crakes have declined dramatically since humans began draining wetlands and are now classed as an at risk relict.

Baillon's crake consists of at least five subspecies globally - affinis in New Zealand, palustris in Australia and Papua New Guinea, mira in Borneo, pusilla through the Palearctic to Asia and intermedia in Africa. 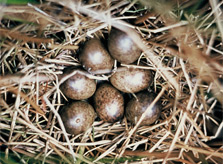 In New Zealand, marsh crakes have been recorded throughout the country but the majority of records are in the South Island where they appear to be more numerous.

They have been recorded in a wide variety of inland and coastal wetland types, particularly Carex secta and raupo (Typha orientalis) swamps.

The most important sites nationally for marsh crake are coastal inlets of Tasman, Nelson and Marlborough, the  Ashburton Lakes (Ō Tū Wharekai wetland) in Canterbury and the Awarua-Waituna wetland complex in Southland.

The main threats to marsh crake/koitareke are:

Other factors which impact on the marsh crake/koitareke:

Wetlands support a wide range of threatened bird species in New Zealand. However, management techniques for restoring their populations are poorly developed.

DOC is focusing on developing methods for surveying marsh crakes systematically. These methods will enable people to establish baseline data and distribution maps; identify important wetland habitat types for conservation and measure the response to management such as pest control; and habitat maintenance and restoration.

DOC has been developing ‘call counts' for  marsh crakes. These take place with either an observer listening for set times at dawn or dusk using call lures, or with new automatic recorders (electronic recorders developed by the DOC Electronics Lab) recording calls remotely.

Report all sightings or calls of marsh crakes to your nearest DOC office.

Ō Tū Wharekai is one of the best examples of an inter-montane wetland system remaining in New Zealand, and is nationally important for wildlife.

Awarua-Waituna Wetlands is one of the largest remaining wetland complexes in New Zealand and is important for its biological diversity and cultural values.