Research published in 2019 shows use of 1080 leads to more kiwi chicks surviving.

There are about 68,000 kiwi left. Kiwi populations are declining by about 2% per year in areas where predators are uncontrolled – that’s about 20 per week.

DOC uses aerial 1080 to protect kiwi from introduced predators in areas from Fiordland to the Coromandel Peninsula.

Since 1990 over 600 kiwi nationwide have been monitored through aerial and ground-based 1080 pest control operations. None have been poisoned. 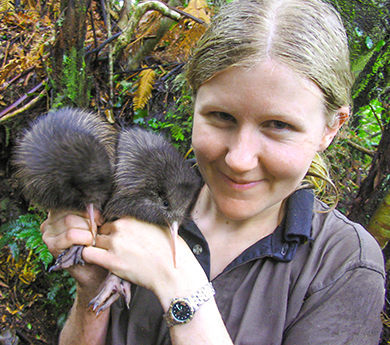 Kiwi chicks were shown to have a much greater chance of survival for two years after aerial 1080 pest control in the first long-term study of its kind in Tongariro Forest in the central North Island.

Our researchers tracked hundreds of North Island brown kiwi and their offspring through four large-scale joint OSPRI/DOC 1080 operations in the 20,000-ha forest over 22 years.

The study began in 1992 and monitored radio-tagged adult male brown kiwi as well as 207 kiwi chicks hatched between 1996 and 2014. None of the 142 radio-tagged kiwi followed through the four 1080 operations were poisoned.

Just over 50% of kiwi chicks survived to six months old in the first breeding season after 1080 treatment and 29% the year after.

In the following three years, survival halved to 15%, which is well below the 22% survival needed to maintain this kiwi population.

The research supported DOC shifting in 2014 from a five to three year cycle of aerial 1080 pest control in Tongariro Forest to allow the kiwi population to grow by 2% or more—which is the target in the Kiwi Recovery Plan.

The study was published Notornis, the peer-reviewed scientific journal of the Ornithological Society of New Zealand (or Birds New Zealand) in March 2019:

In 2016 we published research on how 1080 helped save brown kiwi chicks from untrappable stoats.

Brown kiwi live in the North Island. There are four distinct forms, including the Northland brown kiwi.