Whio raise more ducklings after 1080 treatment than when only traps are used to control stoats.

The whio or blue duck lives in fast-flowing steams in forested upland areas. It’s one of only a few waterfowl species worldwide that live year-round in this environment.

Whio nest on riverbanks and are at high risk of attack by stoats and rats.

Once widespread throughout Aotearoa, they are now limited to rivers in Te Urewera, East Cape and central North Island, and along the West Coast of South Island from Nelson to Fiordland. The total population estimated at about 3000.

In Kahurangi National Park after aerial 1080 operations in 2014 and 2016 duckling numbers increased to 65 and 40 in those years compared to less than 25 where there was no predator control.

Results from monitoring at Kahurangi are outlined below.

Whio raise more fledglings or young after aerial 1080 pest control compared to when only traps are used to control stoats.

We monitored whio in the Wangapeka-Fyfe Security Site in Kahurangi National Park after 1080 treatment in 2011. That season there were approximately 2.2 fledglings per breeding pair. No females were killed by stoats.

DOC did further research to see if 1080 treatment protected nesting whio over a second breeding season.

We monitored at the Wangapeka-Fyfe and Oparara-Ugly security sites in Kahurangi National Park over the 2015/2016 breeding season, after 1080 treatment in 2014. We found some nests were preyed on by stoats. Overall whio raised 0.75 fledglings per pair.

This suggests that 1080 treatment strongly benefits whio breeding the first season but this declines a year later.

Scientists are looking at whether further research is needed into ongoing benefits to whio from 1080 pest control. 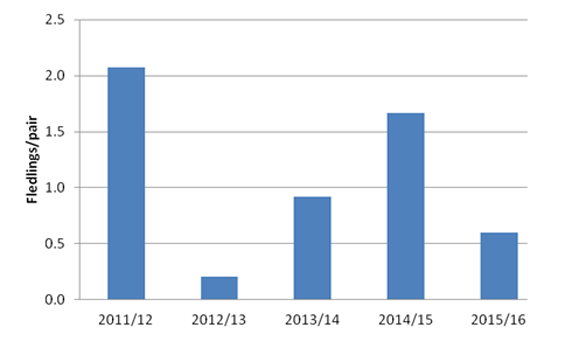