Looking out from Main Antipodes Island to Bollons Island
Image: A Ballance

DOC travelled to the Antipodes Island in winter 2016 and eradicated mice with support from our partners the Morgan Foundation, WWF-New Zealand, Island Conservation and the New Zealand public.

The operation was completed to plan and monitoring in 2018 confirmed the Million Dollar Mouse campaign successfully eradicated mice from Antipodes Island in the New Zealand Subantarctic. More information on monitoring.

View a map of Anitipodes Island

Watch how it was done

Follow the eradication team as they embark on a world-leading conservation effort. 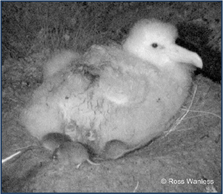 Mice were the only mammalian pest species on the remote Antipodes Islands. They were most likely accidentally introduced in 1893 from a ship wreck or one of the many sealing gangs. Mice were abundant on the main Antipodes Island with an estimated population of 200,000 over the 2012 ha island.

Mice were responsible for the lack of invertebrates on the main Antipodes Island relative to the mouse free offshore islands, causing local extinctions. They competed with the island's unique land bird species; pipit, parakeet and snipe, by competing for food.

Mice were also known to eat the eggs and chicks of seabirds and were implicated in the deaths of albatross chicks on other subantarctic islands like Gough Island. Research on Antipodes Island has shown that mice eat huge numbers of invertebrates and seeds of plants that are critical to the health of the islands.

Moved by his learnings during the Our Far South journey to Antarctica and the subantarctic islands, Gareth Morgan was motivated to raise a million dollars towards the eradication of mice from Antipodes Islands.

The New Zealand public raised $250,000 and WWF gave $100,000 towards the project. The Morgan Foundation matched their donations and brought other key partners together to raise enough money to get the project underway with the rest of the final cost funded by DOC. Island Conservation also joined the team as another key sponsor.

In the winter of 2016, a 13-strong eradication team arrived on the main Antipodes Island. They used helicopters to spread cereal bait containing the rodent toxin brodifacoum from specialised under-slung bait-spreading buckets. They covered the island in two separate applications.

In February 2018, two mice breeding seasons after the program was delivered, a monitoring team arrived to determine the project’s outcome.

They deployed 200 inked tracking tunnels and searched the island for three weeks with two rodent detection dogs from the Conservation Dogs Programme supported by Kiwibank and the Auckland City Council.

Learn about one of the lesser known and least visited islands of New Zealand’s subantarctic islands.

Following three years of planning, the Million Dollar Mouse team is getting ready to depart for Antipodes Island this week where they will carry out major pest control operations over winter.