Henry singlehandedly rowed more than 500 threatened kākāpō and kiwi to island sanctuaries in Fiordland in his own small rowing boat in the 1890s. His aim was to protect them from stoats, ferrets and weasels, introduced to control rabbits.

Henry saw first-hand the devastating impact these introduced predators had on our native birds. He was the first to address this issue and his actions sowed the seeds for today’s programme to make New Zealand Predator Free by 2050.

In 1894, Henry was appointed custodian and caretaker of Resolution Island in Fiordland, New Zealand’s first island reserve for native wildlife. 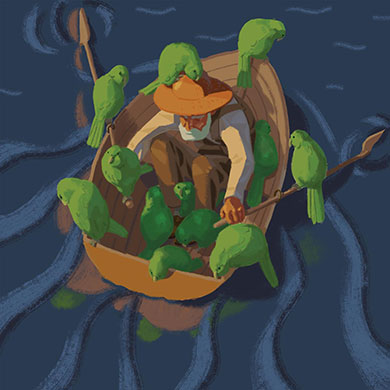 The techniques Henry developed for capturing kākāpō and kiwi and moving them to islands, he thought were free of predators, are still in use today.

“Henry was the first to move native birds to islands, in an effort to protect them from introduced predators, 124 years ago,” says Erica Wilkinson.

“Between 1895 and 1900 he moved more than 500 kākāpō and kiwi from mainland Fiordland to Resolution and neighboring islands, and pioneered some of the most important tools of conservation that we still use today.”

“He was the first to use a muzzled dog, a fox terrier named Lassie, to locate kākāpō and kiwi to move them to islands, where he thought they would be safe from predators.”

Today, conservation dogs are used here and around the world. For DOC, they’re a key tool for detecting predators such as rats and stoats and locating native birds, including kākāpō and kiwi, so we can move them to predator-free islands.”

Unfortunately, Henry’s mission to save hundreds of kākāpō and kiwi by rowing them from the mainland failed, as stoats, ferrets and weasels were able to swim to Resolution Island.

“Henry’s capture and transfer methods were used to rescue kākāpō, takahē, tīeke and other native wildlife from the brink of extinction by moving them to predator-free islands to secure their survival.”

“Henry developed a template for saving endangered native wildlife that we continue to use. He showed us we would lose our unique native birds to introduced predators if we did not take action.”

“Today, the country has embraced Henry’s call to arms. Predator Free communities, businesses and iwi are working to make the whole of Aotearoa safe, so kākāpō may once again boom on the mainland.”

“Ninety years after his death we can honour Richard Henry’s contribution to conservation, and complete his mission, by joining the movement to make New Zealand Predator Free by 2050,” says Erica Wilkinson.

The kākāpō is a nocturnal, flightless parrot. And its strangeness doesn't end there. It's critically endangered and one of New Zealand’s unique treasures.