A new report assessing the risk to DOC locations from coastal flooding reinforces the need to plan for the effects of sea level rise.

The Risk exposure of Department of Conservation (DOC) coastal locations to flooding from the sea report will guide DOC's planning and priorities for the management and maintenance of assets such as tracks, campsites, carparks and boardwalks as well as important coastal ecosystems. 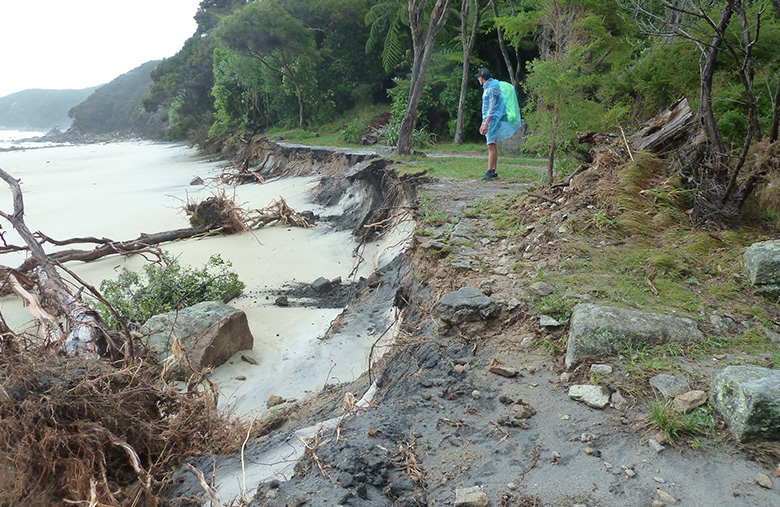 DOC Science Advisor and author of the report, Andrew Tait, says scientists predict that sea levels are likely to rise between 0.5-1m by 2100, increasing the risk of coastal flooding caused by high seas.

"High impact waves could overcome natural and built defences, flooding land and waterways with seawater and silt for extended periods.

"The iconic coastal tracks of Abel Tasman National Park are particularly vulnerable and amongst the 119 recreational locations with assets at risk from coastal flooding.

"More than 400 archaeological sites on public conservation land and 300 of DOC's coastal assets including campgrounds and bridges are at risk.

"Coastal flooding also poses a threat to our coastal ecosystems and threatened species. More than 350 sites where DOC manages ecosystems or specific species have some land at risk, including The Noises Island in the Hauraki Gulf, Horseshoe Lagoon in Canterbury and Maketu Spit in Bay of Plenty."

The report provides a broad national picture for DOC to work with. From here DOC will plan for more detailed assessments at a regional level of the direct and indirect impacts of coastal flooding on DOC locations, and the vulnerability of specific assets. DOC will work with Treaty partners and stakeholders such as community groups and concessionaires to assess risk reduction options and build them into its planning processes.

"The New Zealand Coastal Policy Statement provides DOC with policy direction on the management of coastal hazards in relation to climate change.

"The new risk assessment will help to ensure that mitigating sea level rise and coastal flooding risk becomes integral to the way DOC does business."

The report is available from the Science for Conservation series.