DOC rangers have trapped a rat on pest-free Motutihe Island in the Hauraki Gulf Marine Park. 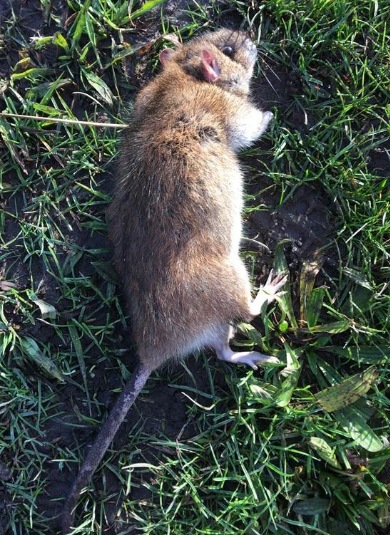 The rat was detected on the island by a video camera set up by the Motuihe Trust to monitor kiwi pukupuku/little spotted kiwi.

Motuihe Trust Chair John Laurence says his volunteers were alarmed to see video of the rat on Sunday night (July 21) as it posed a serious threat to native wildlife on Motuihe. DOC launched a operation to catch the rat on Monday (July 22).

“At the start of the week we set up traps, tracking tunnels and ‘rat motels’ in the area the rat was filmed,” says DOC Auckland Inner Islands Operations Manager Scott Antcliff.

The traps, tunnels and ‘rat motels’ were baited with high quality peanut butter, fresh eggs, rabbit meat and ‘rat bedding’ from pet shops. These are all proven to attract rats.

“Yesterday we received two traps, impregnated with ‘rat scent’, from DOC rangers in the Bay of Islands. We placed these in the area the rat had been seen. This morning a ranger found the dead rat inside one of these traps,” says Scott Antcliff.

“This is a great result by the team set up to catch the rat. This introduced predator posed a significant threat to native wildlife on pest-free Motuihe.”

“We used a ‘rat scented trap’ to catch a rat on pest-free Motutapu a year ago. So this lure is proving very effective in removing rats from pest-free islands.”

Rats eat the eggs and chicks of native birds as well as native lizards and weta. They also eat seeds and flowers, depriving native wildlife of food.

Motuihe has been free of rats, mice and other introduced pests since 2005. The island provides a safe haven for threatened and at-risk native wildlife including kiwi pukupuku/little spotted kiwi, tīeke/saddleback and kākāriki/red-crowned parakeet.

“There’s always a risk of a rat or other pest making it to a pest-free island,” says Scott Antcliff.

“We’re reminding people to ensure their boats, yachts and kayaks are not carrying a rat or mouse when they sail to Motuihe or other pest-free islands in the Hauraki Gulf Marine Park.”

Crystal clear swimming, white sandy beaches, and a variety of native bush walks with the unique opportunity to see tuatara in the wild – this pest-free island has something for everyone.