Three young whio were released into the Wangapeka-Fyfe Whio Security Site this week as part of a new programme to boost whio numbers.

Three young whio/blue ducks were this week the first to be released into the Wangapeka-Fyfe Whio Security Site in Kahurangi National Park as part of a new ‘breed for release’ programme to boost whio numbers. 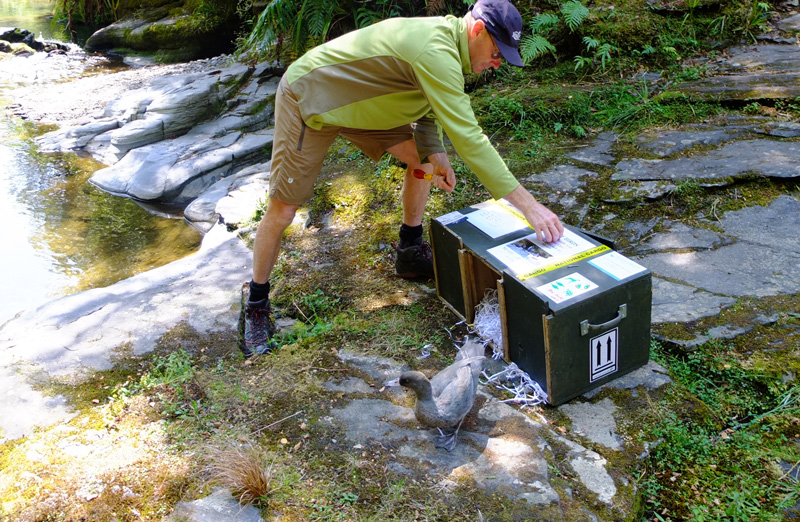 The Wangapeka -Fyfe Whio Security Site receives funding from the Whio Forever programme that is a partnership between Genesis and DOC.

"Captive whio lay between four and eight eggs and they can produce two or three clutches in a breeding season. To encourage the whio pairs to produce more clutches, eggs from their first one or two clutches are taken from them after 10 days of incubation to be hatched and raised at The Isaac Conservation and Wildlife Trust in Christchurch."

According to Cam Speedy, Genesis Senior Environmental Coordinator and advisor to the Whio Forever technical committee, the breed for release programme can only work because of the extensive predator control network in the region and the dedication of the DOC whio experts.

"The South Island presents different challenges to the North Island in terms of whio protection in that the river systems and catchments are so much bigger. This means the number of traps required to protect the area has to significantly increase," says Cam Speedy.

"These ducklings have a much better chance of survival today than even a few years ago. The numbers we are now seeing in this whio security site are incredible and it is a credit to the hard work and determination of those involved."

Ivan Rogers says, "We really appreciate the support of The Isaac Conservation and Wildlife Trust and the other wildlife centres involved for their help with this breed for release technique that is valuable for increasing whio numbers."

The Wangapeka-Fyfe Whio Security Site was established in 2003 with a goal to protect 50 pairs. In early 2017, 43 adult pairs were found in the most recent count using whio-detecting conservation dogs.

An extensive stoat trapping network and aerial 1080 predator control are helping to protect the Wangapeka-Fyfe whio. Stoats are the main threat to whio, stealing eggs and preying on nesting females and ducklings.

The Wangapeka-Fyfe Security Site started with one whio pair found in 10 km of waterway, and 3.6 km of stoat trap-line. It has since expanded and now has 1054 traps along 83.4 km of waterways.

The programme receives funding from Genesis who support nationwide efforts to secure and grow whio populations on New Zealand rivers through its Whio Forever partnership with DOC.