DOC says that the high number of dead native trees being seen across the top of the South Island is likely caused by drought stress. 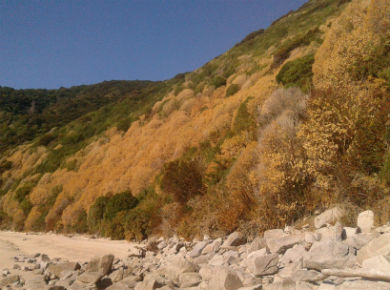 DOC botanist, Shannel Courtney, says root stress from a very wet winter and spring in 2018 had already weakened the trees and the extremely dry conditions are proving fatal.

“It is a much worse event than the previous big drought in 2001. As we are likely to have more droughts due to climate change, we can expect to see vegetation dieback like this happening more often.”

Nelson helicopter pilot Matt Gibb has commented to DOC staff that it is the first time he has seen this many dead native trees in 25 years of flying around Nelson.

“The ridges especially are speckled with dead trees, including in the Wairoa Valley and the Wangapeka area of Kahurangi National Park. They are becoming very noticeable” he says.

Dead trees have also been reported in the Murchison and Nelson Lakes area, the Wairau Valley in Marlborough, the Marlborough Sounds and the Takaka area in Golden Bay.

DOC staff have seen extensive areas of dead mahoe in Abel Tasman National Park’s Wainui Inlet, browning rimu trees on dry ridges near the Heaphy Track, and dead beech trees particularly in places where they grow on thin or stony soils along the banks of the Buller River. Beech trees are shallow rooted so do better on deeper silt or clay soils, which hold more water in a drought than thin, alluvial or stony soils.

Dead introduced species, including pines and eucalyptus, have also been reported.

It is also possible heavy beech seeding this summer could have added further stress on the trees. Beech species flower around October and develop seed from December to March, which coincided with the driest conditions.

Shannel Courtney says that further tree deaths are likely for up to two years due to factors such as soil type and insect or fungal attack on trees weakened by drought and other stressors.

This effect was observed in research on widespread canopy tree mortality in 1917 following an intense drought in the Ruahine mountain range in 1914/15. Despite the extensive damage, the forest eventually regenerated, although it appeared to lower the treeline along the upper edge of the high-altitude forest.

He says the forest will regenerate once dead trees fall, but there is some risk of woody weed invasion where there are wilding pines or other pest plants nearby. Mahoe has a remarkable ability to recover once soil moisture returns.

The native flora of New Zealand is unique as it evolved in isolation for millions of years.