DOC is closing off the unofficial walkway that leads from Matapouri Bay over Rangitapu Headland to Mermaid Pools.

In support of the rāhui placed on the Otīto Scenic Reserve by local hapū Te Whanau a Rangiwhakaahu, DOC will close off the unofficial walkway that leads from Matapouri Bay over Rangitapu Headland to Te Wai O Te Taniwha/Mermaid Pools and discourage all visitors from accessing both the scenic reserve and the pools.

The dangerous nature of the walkway, the lack of consultation in its construction, and the ongoing ecological and cultural damage to the Reserve are driving factors which has led to DOC publicly supporting the rāhui.

The unofficial walkway was cut across the top of Otīto Reserve’s sacred Rangitapu Pā without prior consultation and support from local hapū and DOC, and as such is missing vital health and safety requirements to qualify as a public walking track.

It is a high-risk walkway, with wear and tear making it exceptionally slippery, especially in wet weather. Steep sections of the walkway are missing required safety features, with trip hazards such as exposed roots; slippery, jagged rocks; and potholes making accidents on the Pā and around the Pools a reality.

The environmental and cultural health of Te Wai O Te Taniwha/the Mermaid Pools and Rangitapu Pā is also being impacted on by the sheer number of visitors using the unofficial walkway. A recent inspection of Rangitapu Pā and Te Wai O Te Taniwha/the Mermaid Pools by hapū and local DOC staff have uncovered damage to the ngāhere/native bush, unsanitary waste on the sacred Pā and scattered on the rocks around the Pools. Ecological research undertaken by local hapū have shown a decrease in the general health of the Pools and ngāhere especially during busy summer months.

Up until 2010, a natural accessway allowed visitors to Te Wai O Te Taniwha/the Mermaid Pools via a gap in the rocks that previously gave low-tide access only. After the accessway collapsed in 2010, the unofficial walkway was cut across Rangitapu Pā allowing an all-tides access to Te Wai O Te Taniwha/the Mermaid Pools. This walkway was never officially established by DOC, and has never been managed or promoted by DOC. The new all-tides walkway has led to a series of accidents in and around the Pools when large, high-tide waves have washed over and swept people into the sea or across the rocks leading to near drownings and serious injuries.

In addition to the health and safety aspect of closing the walkway, DOC has a responsibility under the Treaty of Waitangi which includes enabling hapū to practise their responsibilities as kaitiaki (guardians) on public conservation lands and waters. This responsibility includes components of protection, guardianship, stewardship and customary use in relation to ancestral lands, water, sites, resources and other taonga.

The focus of kaitiakitanga (guardianship) is manaaki (care) and rāhui (protection). Te Whanau a Rangiwhakaahu hapū are kaitiaki of the Matapouri area including the Otīto Scenic Reserve where Te Wai O Te Taniwha/the Mermaid Pools are situated.

DOC is fully supportive of local hapū placing a rāhui on the Reserve to help restore not only the ecology of the area, but the mauri (life force) as well, and will be working with the hapū in the restoration of Rangitapu Pā and Te Wai O Te Taniwha/the Mermaid Pools over the coming months. This restoration work is likely to include more signage, planting on the damaged sections of Rangitapu Pā, temporary fencing to protect plantings and other remedial works as deemed necessary by both local hapū and DOC.

Te Whanau a Rangiwhakaahu Hapū and DOC welcomes visitors to Matapouri and hopes that they enjoy some of the most beautiful coastline in Northland - two of these places being the sheltered bays to the north and south of Rangitapu Pā. 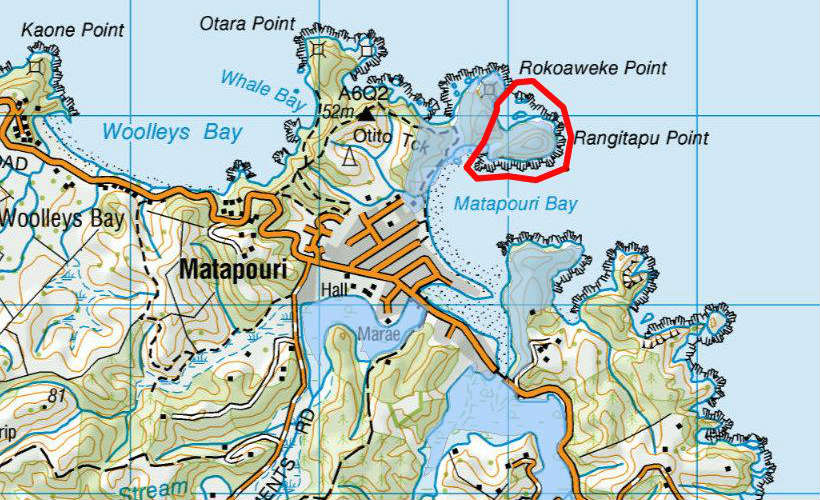