DOC is appealing for information from the public about the shooting of endangered black-billed gulls at Sulphur Bay in Rotorua.

DOC is treating the deaths of the gulls seriously as the black-billed gull is the most endangered gull species on the planet. 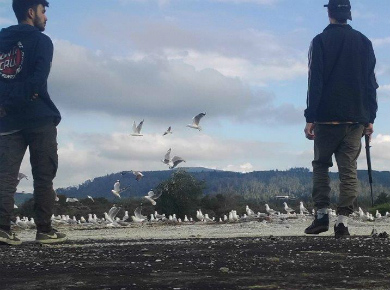 Two males were photographed carrying firearms. Images show the men were pointing the rifle at the gulls.

“These special birds are a taonga to Rotorua and are threatened with extinction,” Ms Te Rangi says.

“The deliberate killing by people is preventable and unacceptable risk, and we would like to hear from anyone who has information about the incident or can identify the men in the photographs.”

Black-billed gulls are a protected species under the Wildlife Act 1953 and it is illegal to kill them. The offence of hunting or killing absolutely protected wildlife has penalties of up to two years’ imprisonment or a fine of up to $100,000 or both.

New Zealand's only endemic gull is found mainly on braided rivers in the South Island.