DOC Director-General Lou Sanson has announced that the 2019 winner of the Stephen O’Dea Developmental award is Senior Ranger/Supervisor Suvi van Smit from the West Coast. 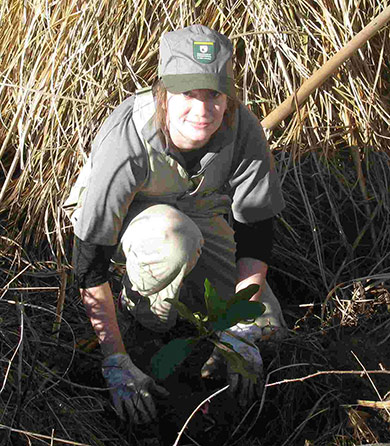 Awarded annually on World Ranger Day, the Stephen O'Dea Developmental Award was established in 1996 in memory of Stephen O'Dea, the Field Centre Manager at Punakaiki who died along with 13 Tai Poutini Polytechnic students when the Cave Creek viewing platform collapsed on 28 April 1995.

"Suvi, who's been with DOC for the more than nine years, and based in Buller, will use the study award to learn about how Parks Canada works with First Nations through a co-management model," Lou Sanson says.

"This study trip is timely as DOC, Ngāti Waewae and Ngāi Tahu Tourism work together to develop a $5 m experience centre at Punakaiki which will be gifted to Ngāti Waewae to own and manage.

"Ngāti Waewae and DOC are keen to develop a better understanding of how we might best achieve genuine shared decision making. This development award is an ideal pathway to learn from the experiences of others internationally.

"Selecting the four was challenging as DOC is incredibly fortunate to have such a talented and dedicated workforce," Lou Sanson says.

The DOC rangers attending the congress are:

Jaycee is a community ranger based in Whanganui with a strong biodiversity background. Her work includes conservation education within the community including schools and volunteer groups. She also supports Iwi and the collaboration of science and indigenous mātauranga. She has valuable experience in marine mammals and has been involved in several strandings over the past year in a cultural and technical capacity. Jaycee is the district's Predator Free 2050 Ranger as well as Central North Island's lead for Conservation Week 2019.

Hirere is a ranger with Ngā Whenua Rahui based in Opotiki. Hirere showed how her passion for conservation transcends the great work she does in DOC to include small hapū and community projects. Hirere sees the World Ranger Congress as an opportunity to connect with other indigenous rangers, explore how they incorporate cultural practices into their work that might resonate with Te Ao Māori, and share the ways we monitor our ngahere using our own cultural practices.

Michelle is a community ranger in Hokitika. Her work has focused on protecting some of our most precious ecosystems. She has contributed to protecting lowland kahikatea forest from mining and worked on a land swap with a farmer to gain high-value coastal remnant forest for the DOC estate. Michelle wants to understand the pressures other rangers, especially female rangers, experience managing species and opportunities on working collaboratively towards conservation. She's also interested in using the forum to understand how we can incorporate technology into land management, and how other rangers incorporate indigenous knowledge into conservation practices.

Jamie is a community ranger based in Kaitaia. Jamie played a key role at a Far North pygmy whale stranding, including consulting and including local Iwi, welcoming and inducting 300 volunteers, and fronting media. Jamie's work with a local restoration group – Friends of Rangikapiti Reserve – encouraged them to aspire towards predator-free status. Jamie sees the forum as an important opportunity to work with other indigenous people to understand what problems we might share, and what solutions might exist elsewhere. He is also very interested in how new technology from across the globe can help him with drone work.

"It is with sadness that as we mark World Ranger Day, we remember it was less than a year ago that we lost two remarkable DOC rangers in Paul Hondelink and Scott Theobald.

"Since the Wanaka Helicopter tragedy, we have honoured these legends in many ways. We will never forget them or the huge contribution they made to conservation in this country," Lou Sanson says.