DOC is marking World Ranger Day by launching a new uniform for its frontline rangers that is more comfortable and offers greater protection from the elements.

“Rangers are out there in all conditions trapping predators, tracking threatened species, servicing huts, maintaining tracks and doing other tasks. They work in diverse and tough environments, from the sub-tropical Kermadecs to the subantarctic islands, and from the mountains to the sea.

“The new uniform range has been designed to specifically fulfil the needs of DOC staff working in New Zealand with one of our own rangers, Mat Nalder, doing most of the initial design with input from other DOC staff. Mat had a global career in design and procurement of outdoor gear before he joined DOC in Golden Bay,” says Mr Slater.

The last uniform was introduced in the mid-1990s with items added over the following two decades. 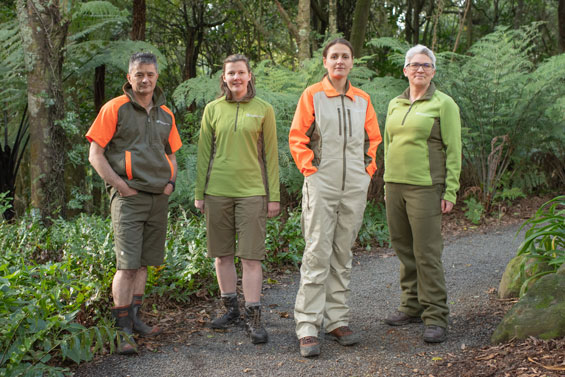 The new, more fit-for-purpose uniform incorporates more modern high-performance materials and performance features. It utilises an outdoor wear layering system that allows rangers to layer their work clothing as needed for the job they’re doing and the conditions. The range includes clothing for UV protection and insulation, heavy-duty work wear and more high-visibility items for safety.

“DOC’s rangers are at the core of what we do and equipping them with a new uniform on World Ranger Day is a fitting tribute, recognising their service to New Zealand’s nature and public, says Mr Slater.

Rangers who work in the field are the first to wear the new uniform, in a three-year rollout of the new range. Office-based staff who wear a uniform, including community rangers and administration officers, will get their new uniforms next year and thermal wear and technical rainwear will be issued the following year.

The cost of the uniform replacement is spread over four years with a total budget of $4.73 million. This covers supply of the new uniform, re-purposing of the old uniform and other project costs.

Today we celebrate and remember. Here’s a small glimpse into the other lives of our rangers this World Ranger Day.

Discover the cultural story behind elements of our uniform.