How to keep livestock and pets safe

You can limit risks to non-target species including dogs, livestock, deer, pigs, fish and invertebrates. 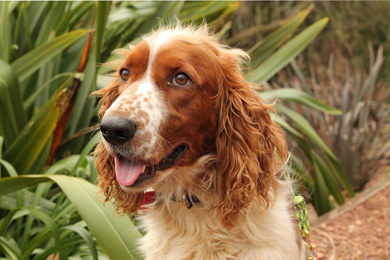 We warn dog owners of 1080’s presence and its associated risks by placing clear signs at track entrances.

Dogs are particularly sensitive to 1080 and must be kept away from baits and carcasses.

1080 can persist for some months in carcasses of target pests. In colder temperatures, degradation is slowed further. Most dog deaths result from scavenging on poisoned possums, particularly the stomach.

Dog owners should take care to ensure their dog does not come into contact with baits or poisoned carcases.

We work with farmers that are adjacent to pest control operations to manage their stock. Buffer zones are put in place and livestock are mustered away from controlled drop areas until the all-clear is given.

OSPRI are responsible for eradicating bovine tuberculosis which is carried by possums and ferrets. So, reducing pest populations reduces risks to livestock. Where possible, DOC and OSPRI work together on pest control operations to maximise the benefits for natural heritage and livestock health.

Deer are not targeted by aerial 1080 operations, but some deer may be affected by 1080 operations designed to protect natural values. Susceptibility depends on the timing of the operation, the size of the animal and the species.

We recognise the value of hunting in New Zealand and we work with hunting groups. We sometimes add deer repellent to 1080 bait to reduce the impact on popular deer-hunting areas. However, there are valid concerns about deer-browsing damage on plant communities.

Do not eat deer from 1080 treatment areas while warning signs are present.

Although pigs may be killed during a 1080 operation, their populations aren’t significantly affected. Local observations suggest pig populations rebound quickly – pigs respond to the increased berries and other food sources which increase after possum control.

Do not eat pigs from 1080 treatment areas while warning signs are present.

Read the research done by the National Institute of Water and Atmospheric Research (NIWA), Landcare Research, Ministry for Primary Industries (MPI) and others:

The following review refers to five different studies conducted over 11 years (1994–2005). Each concludes that 1080 has no detectable impact on invertebrate populations.

When used according to the regulations, 1080 is a safe and effective way of controlling the predators that threaten the survival of many native species.