Lancewood, or horoeka, is a unique, small tree with lance-like foliage that changes dramatically as the tree matures. 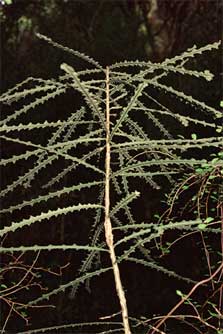 Lancewood, or horoeka, is a unique, small tree with lance-like foliage that changes dramatically as the tree matures. In fact, young trees are so different from adults that early botanists believed they were different species.

Juveniles have a very straight and thin trunk without branches and a cluster of long, narrow, deflexed leaves at the top.

Adult leaves are less than half the length of the juvenile’s leaves and twice the width, and they form a rounded crown at the top of the tree.

Where is it found?

Lancewood is a common plant found throughout lowland and montane forests and shrublands on the North, South and Stewart Islands. The juvenile form is particularly abundant in regenerating bush and along forest edges, especially in lowland areas. 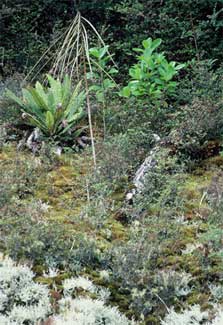 There are three species of lancewood, all called horoeka by Māori. The rarest is fierce lancewood, so named because of its shark-tooth projections along the leaf margins.

Plants are either male or female. The small, greenish-yellow flowers are pollinated by insects. The purplish-black fruits are an important food source for whitehead, tūī and wood pigeon/ kererū when they occur in autumn and winter. In Māori lore, the flowering of lancewood was an indication that birds would be plentiful the following year, because the fruits take a whole year to ripen.

Lancewood can grow up to 15 metres high, with a trunk 50 centimetres in diameter. It has smooth bark, with rope-like ridges in the juvenile form. Plants remain in their juvenile stage for about 15–20 years.

The name lancewood probably derives from either the small lances evident in the wood when it is split, or from early Māori use of the juvenile tree stems to spear wood pigeons/kererū.

The midribs of young leaves are strong and supple and were used by European settlers as bootlaces and for mending bridles and harnesses. The straight, flexible trunks were sometimes used as whips.

Lancewood was occasionally used as a source of timber, mostly in Otago, but the wood is not as durable as some other species.

South Island Māori pounded lancewood leaves and extracted its long ‘hairs’ for use in a kind of paint brush that was used to make rock paintings.

Scientists call the condition of having very distinct juvenile and adult forms ‘heteroblasty’. There is no general agreement about why certain plant species do this, but scientists have several competing theories. One theory suggests that it evolved as a response to moa browsing, and that once trees grew above moa height, they no longer needed the special defences of their juvenile leaves.

Another theory proposes that the change occurs as a response to the climatic changes that the trees undergo as they move from the understory up to the sub-canopy.

A third theory suggests that the change occurs because of a reallocation of resources as plants grow. Young plants presumably need to allocate more resources to gaining height to prevent being shaded by other plants, while adults can devote more energy to making leaves and branches.

Use this resource to experience native trees in your school grounds or another local green space.