Kauri are among the world's mightiest trees, growing to over 50 m tall, with trunk girths up to 16 m, and living for over 2,000 years.

Kauri dieback disease is a relatively new threat, but we can help reduce its spread by being careful and following the signs when visiting kauri forests.

Kauri were prolific in the past

Kauri forests once covered 1.2 million ha from the Far North of Northland to Te Kauri, near Kawhia and were common when the first people arrived around 1,000 years ago.

Past uses of kauri

Maori used kauri timber for boat building, carving and building houses. The gum was used as a fire starter and for chewing (after it had been soaked in water and mixed with the milk of the puha plant).

The arrival of European settlers in the 1700s to 1800s saw the decimation of these magnificent forests. Sailors quickly realised the trunks of young kauri were ideal for ships' masts and spars, and the settlers who followed felled the mature trees to yielded huge quantities of sawn timber of unsurpassed quality for building.

The gum too, became essential in the manufacture of varnishes and other resin-based products. The gum was obtained through digging, fossicking in treetops, or more drastically, by bleeding live trees.

More forest was cleared as demand for farmland and timber increased in the early and mid 20th century. 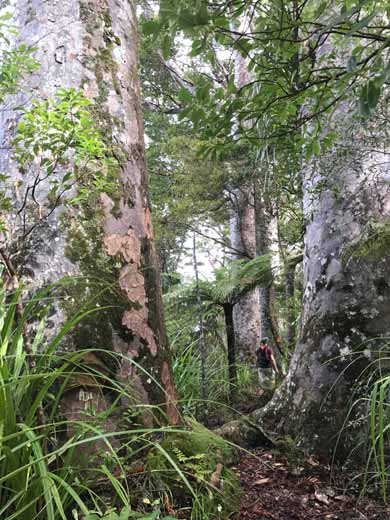 There are calls for a national park comprising all the substantial scattered remnants of kauri forest. Adolescent trees have straight pole trunks and a distinctive narrow conical crown. As the trees mature the trunk thickens and the lower branches are shed, resulting in the clean, straight trunk of the adult kauri.

Kauri forests are home to many other trees and plants including taraire, kohekohe, towai, Kirk’s pine, toatoa, tanekaha and rata, and a diverse understory of shrubs and other plants. In fact, because kauri live so long and their leaves are high in tannins, they modify the soil they live on, and create specialised habitats such as gumlands.

The Waipoua forests of Northland were at first saved from destruction by their remoteness. The land was purchased by the Crown in 1876, but for decades there was debate over what should be done with the forest. Public pressure for total protection increased after the turn of the century, although in the 1940s kauri was logged for wartime boat building supplies.

In 1952 the 9,105 hectare Waipoua Sanctuary was finally declared, with all remaining kauri forests in Crown lands coming under the protection of the Department of Conservation by 1987. Kauri trees on private land are now also largely protected.

Waipoua is home to Tane Mahuta, king of the forest and the largest remaining kauri tree in the country. The 1,500 year old Tane Mahuta is 51.5 m tall, with a girth of 13.77 m.

A lasting reminder of the once-thriving kauri industry are the kauri dams. Kauri driving dams were built by loggers to drive large quantities of kauri logs downstream from remote areas. While they played a major role in the destruction of the forest, they were also impressive engineering feats, built without drawings or detailed calculations, yet able to withstand the pressure of tonnes of water and kauri logs which were swept through with tremendous force when the dam was tripped.

In the Kauaeranga Valley on the Coromandel, kauri was logged extensively for over 50 years with more than 60 dams built. In 1970 remaining areas of surviving forest were deemed protected as part of the Coromandel Forest Park.

Now kauri are facing a new threat. Kauri dieback is a fungus-type disease, Phytophthora agathidicida (PA), which is having a devastating effect on New Zealand’s kauri forests in Northland, Great Barrier Island and, potentially, the Coromandel Peninsula.

There is no known cure for kauri dieback, but we can help reduce its spread by cleaning boots and equipment and avoiding kauri tree roots. Any movement of soil around the roots of trees could spread the disease.

DOC, iwi, regional councils, MPI and local communities are working together to protect our kauri forests through the ‘Kia Toitu He Kauri – Keep Kauri Standing’ programme.

Our Kauri Dieback Recreation Project aims to control the human spread of the disease on public conservation land.

Watch a video about Tane Mahuta and Te Matua Ngahere - two of the famous and ancient kauri in the Waipoua Forest.