Humpback whales are easy to identify and are well known for their spectacular breaching and beautiful, complex songs.

Humpback whales have a small dorsal fin with a distinctive hump at the front, knobbly protuberances on the head, tip of lower jaw and leading edge of extremely long flippers.

Their tail flukes are broad and have a unique black and white colour pattern, which allow individuals to be identified. They have a variable colour but are generally black with white on the underside and on the flippers.

In the Southern hemisphere, commercial whaling in the 20th century brought humpbacks close to extinction. NZ ceased whaling in 1964, with the closure of the Perano whaling station in Tory channel. The stocks had diminished such that humpbacks were no longer migrating through Cook Strait and commercial whaling was no longer viable. Since then New Zealand has become a vocal advocate for whale protection and conservation. 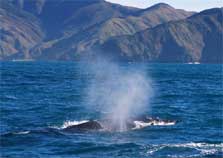 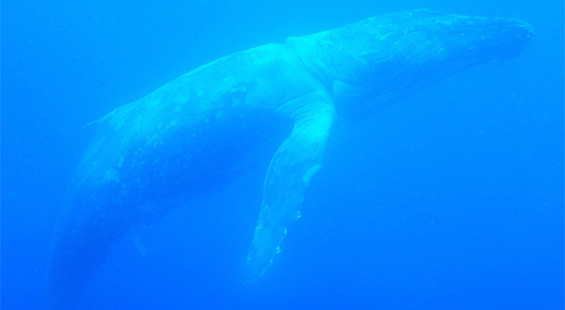 Humpback whales have a small dorsal fin with a distinctive hump at the front, knobbly protuberances on the head, tip of lower jaw and leading edge of extremely long flippers

In the Southern Hemisphere there are six humpback whale stocks, as defined by their Antarctic summer feeding areas. They are frequent visitors to the coastal waters of New Zealand when they undertake seasonal long distance migrations (approximately 10,000 km/yr) between summer feeding grounds in high latitudes (Antarctica) and winter calving and breeding grounds in tropical or near tropical waters. They travel mainly along the east-coast of the South Island and through Cook Strait during winter, and return along the west-coast during spring.

The Oceania population of humpback whales was classified in 2008 as 'endangered' by the International Union for Conservation of Nature (IUCN).

These whales are baleen feeders with a generalised diet, including krill and small schooling fish (e.g. mackerel and herring). They show the most diverse feeding techniques of all baleen whales including lunging through patches of prey, stunning prey with their flippers and forming "bubble-nets".

Breeding and calving both occur in winter, as gestation lasts around 11 months. Nursing seems to continue until calves are one year old. Both females and males are sexually mature at around 5 years old and females typically give birth every two to three years.

Due to their coastal distribution, humpback whales were heavily exploited by the whaling industry, and it is estimated that over 90% of some populations were killed. Most populations now appear to be recovering. These whales are known to die from entanglement in fishing gear and collisions with ships. As these animals are only visitors to New Zealand, whale watching is opportunistic and is unlikely to affect their behaviour.

The Department of Conservation has been undertaking whale surveys in Cook Strait annually since 2004 to determine the present status and level of recovery of humpback whales in New Zealand waters. It also sheds light on the migratory pathways and destinations of these whales. This information will be used for management of these whales and further their protection in the Southern hemisphere. This is the only project of its kind in New Zealand waters.

In 2008, OMV NZ Ltd signed up to a partnership with DOC to support the Cook Strait whale project for 8 years. It provided an opportunity for DOC and OMV to work together. The project is also supported by Transact Management Ltd, Bell Tea NZ Ltd and University of Auckland, Molecular Ecology Laboratory.

DOC contributes to humpback research and management programmes in the South Pacific. One aspect of this includes collecting photographs of whales photographed on the Cook Strait whale survey and those taken by the public on an opportunistic basis and collating them into a New Zealand catalogue.

Such catalogues allow us to identify individuals and estimate population sizes and movements. Genetic sampling is also undertaken on the Cook Strait whale survey to determine the relationship between individuals seen in New Zealand and other populations. 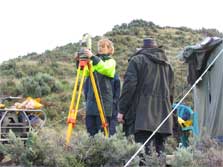 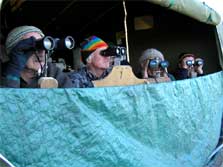 Ex-whalers looking for whales as part of a survey Reports of sightings are always valuable and help increase our knowledge of whale distribution and movements around New Zealand.

If you need help identifying species, download the marine mammal sighting form (PDF, 416K) (Word, 4,300K). You can use the images and descriptions to find out which species of whale you observed.

Include as much information as possible with your sighting:

How to approach whales (including orca and pilot whales)

You can also help keep their environment clean by taking rubbish home with you or disposing of it appropriately on land. Some rubbish can be lethal to whales.

It is an offence under the Marine Mammals Protection Act 1978 (MMPA) to disturb, harass, harm, injure or kill a whale. Anyone charged under the MMPA with harassing, disturbing, injuring or killing a whale faces a maximum penalty of two years’ imprisonment or a fine to a maximum of $250,000.

If you accidentally catch or harm a whale

Never attempt to release a whale entangled in a net or rope. Entangled whales are very dangerous and disentanglement should only be undertaken by specially trained personnel. In these circumstance, contact our hotline immediately.

How you can help in a stranding.

New Zealand stopped whaling in 1964 when the last whaling station in Cook Strait closed. In this video you'll meet the ex-whalers who now use their skills to help protect whales.