Confined to the subantarctic Snares Islands, the Snares crested penguin nests in dense colonies under forest.

Colonies can have up to 1,500 pairs. Snares penguins often roost on branches overhanging the colony, sometimes up to 2 m off the ground.

At three weeks of age, chicks join a crèche while both parents forage for food.

The Snares Islands are a Nature Reserve and part of the New Zealand Subantarctic World Heritage Area. To protect the islands and their inhabitants, tourist landings are not permitted. Some cruise ships do however visit the islands where the penguins can be observed by boat. 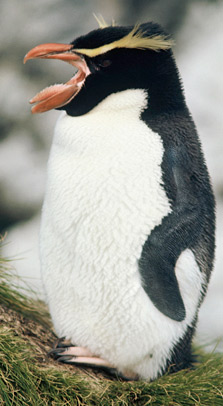 The Snares Islands are the only New Zealand subantarctic islands never to have had introduced mammals. Their rodent and cat-free status make them very important for many seabirds.

Snares penguins have a number of natural predators like leopard seals, skua and giant petrels, but the factors most likely to affect the penguin population are climate and food availability - both of which are influenced by man.

DOC works with visitors to the islands to ensure that no plants, animals or insects are accidentally introduced and that human disturbance is limited.

The penguin population is monitored by nest counts every few years. Counting the 25,000 to 30,000 nests takes a small team of workers around 2 weeks to complete.

If you see moulting Snares and other crested penguins on east-coast South Island beaches, report them to 0800 DOC HOT (0800 362 468). Many of these birds are likely to be in poor condition or vulnerable to dog attack.

You can also report penguins outside their normal range to Birds New Zealand.

The Snares are the northernmost of New Zealand’s subantarctic islands and one of the most untouched and pristine areas in New Zealand.