Freshwater fish need different types of habitat like swift, shallow water, sluggish pools and backwaters, and access to the sea.

New Zealand’s diverse freshwater fish species use many different river and stream habitats – many require specific habitats to complete their lifecycle. To be healthy, native fish communities need to have access to a range of good quality habitats.

Migratory fish move between freshwater and the sea during their lifecycle. Some species travel further inland than others, making small headwater streams and rivers just as important as larger waterways. Small streams also have more diverse habitats and therefore usually more fish.

For example, kōaro, redfin bully and torrentfish/panoko spawn in freshwater, move downstream as larvae, grow into juvenile fish at sea, then travel back upstream to mature into adults. Juvenile galaxiids are often found in the slow flowing areas along a stream edge, while the adults prefer slow flowing wetlands (giant kōkopu) or fast flowing mountain streams (kōaro). 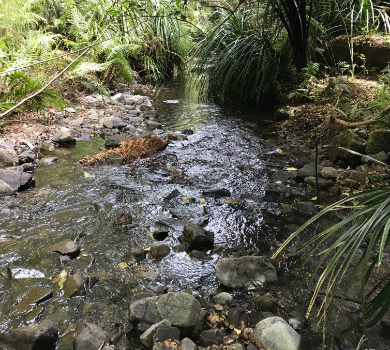 Rapids and riffles are short, steep sections of river with fast-flowing, shallow water. Rocks and large stones in these areas provide a stable base for algae, plants and invertebrates to live on. Spaces between rocks provide spaces for fish to hide and to spawn.

Rapids and riffles provide habitat for many native fish including:

Rapids and riffles can be degraded by many pressures. These include reduced water flows, and fine sediment that smothers the stones and rocks, reducing habitat for algae, invertebrates and fish. 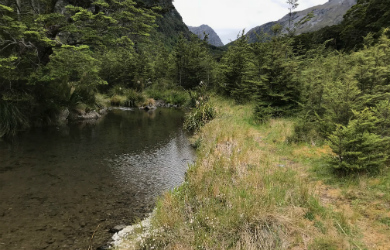 Pools are deep, slow-flowing stretches of river with a smooth surface. Pools often form on the outside of bends in a river or stream, and collect sediment and organic matter carried downstream.

Pools provide habitat for many native fish including:

Pools are often missing in waterways that have been straightened or narrowed to drain land or improve the flow of flood water. 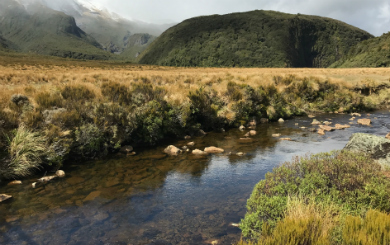 Runs are stretches of river with a uniform current, an unbroken surface and moderate depth and water flow.

Runs are important habitat for native fish including:

Most streams and rivers contain runs, but they can be degraded by sedimentation, river widening and a lack of vegetation along and beside the banks.

Backwaters are areas of a river or stream that are open to the river at only one end, usually the downstream end. Backwaters form when side channels or river meanders are cut off from the main flow as a river moves. They have little or no water flow.

In large alpine and braided rivers, backwaters are important places for fish to escape from high flows and floods, and are used by many juvenile native fish.

Backwaters are often changed or removed as a result of flood protection work and other riparian and in-stream works.

In-stream cover gives fish shelter in rivers and streams. It can be provided by:

In-stream cover is important for most native fish but different species prefer different types of cover. For example, undercut banks are often used by banded kōkopu, shortjaw kōkopu and eels (tuna) while inanga use overhanging vegetation.

Some types of cover also form a foundation for other types of habitat, e.g. trees and woody debris can create a pool.

Riparian (stream-side) vegetation provides shade, shelter and spawning habitat for some species. It also improves the water quality by soaking up nutrients and trapping sediment before they enter a stream, and contribute debris to the stream.

Migratory galaxias (whitebait) species spawn on riverbanks, laying their eggs in grasses during spring tides (inanga), or in gravels and damp leaf litter during floods (kōaro and kōkopu).

Many of New Zealand’s freshwater ecosystems have been modified and their water quality degraded. This has reduced the amount of fish habitat and created habitats that are no longer suitable for native freshwater fish, invertebrates, plants and algae.

Whitebait are the juveniles of six species of fish. Five of these are migratory galaxiids: inanga, banded kōkopu, giant kōkopu, kōaro and shortjaw kōkopu. The sixth species is common smelt.

New Zealand’s streams are home to macroinvertebrates - tiny animals that live on and under rocks, waterplants, wood or debris. They have no backbones and can be seen without a magnifying glass or microscope.

Green slime and brown scum on stream beds is usually regarded as an unattractive nuisance however, it is a vital part of stream ecosystems.