A series of posters to support learning about Auckland's unique animal life, and to encourage outdoor exploration.

Some places where these native birds can be found:

Note: Kiwi are only active at night, and often difficult to spot, but there are opportunities to camp overnight at some of these locations.

Some places where these shore and sea birds can be found:

All the marine species on the poster can be found in the Hauraki Gulf Marine Park, however seeing them might be a bit tricky.

A trip to any marine reserve is a great opportunity to study lots of other kinds of marine life in its natural habitat. 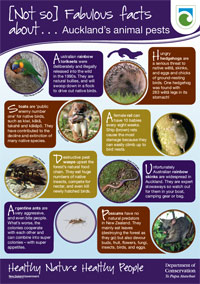 These predators are found everywhere on the mainland where predator control is not being carried out.

Visit our predator-free islands in the Hauraki Gulf to experience wildlife the way it was meant to be, before the arrival of humans and their accompanying predators to New Zealand.

Let us know if you have any questions or recommendations

Share your stories about learning and teaching in nature. Show others what you've done and also help encourage them.

Explore the lives of seabirds and investigate the impact humans have on the ecology of seabirds, and the role seabirds play in their environment.

Use this resource to learn how to protect our unique marine environment.