The Fiordland Wapiti Foundation works in partnership with DOC to educate and promote public awareness of wapiti deer in New Zealand. 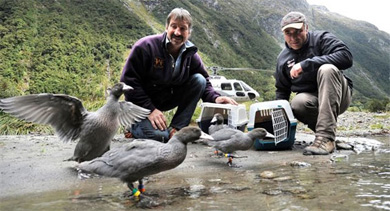 The Foundation has controlled the animal numbers in the wapiti area since 2004 and has removed 7118 non-wapiti type animals as of June 2013. The programme is funded by donations taken during the wapiti ballot. 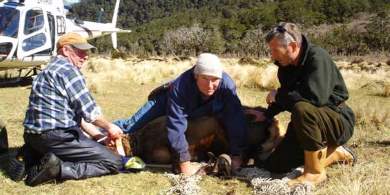 Attaching a tracking collar to a wapiti deer

Since 2000, as part of what was the Operation Ark Project, DOC has been carrying out stoat control work in the area adjacent to the Worsley and Castle Rivers for the benefit of many native species including whio, kiwi, robins, pateke, kaka, kea and weka.

As the population of whio were increasing in the Clinton, Arthur and Cleddau catchments, the juveniles were moving into new territory and leaving the safe environment of stoat trapped areas.

When this trend was realised in 2004, the FWF saw an opportunity to take action. The 200 member strong group realised that if they complemented the stoat trapping work already being done by DOC in the neighbouring valleys, they could help to ensure whio stayed in the area and survived.

FWF now manage 26 km of stoat line in the Worsley Valley and 20 km in the neighbouring valley of the Glaisnock.

The hunters' efforts have enabled an additional 44 kilometres of river valley to be managed for the protection of threatened species. 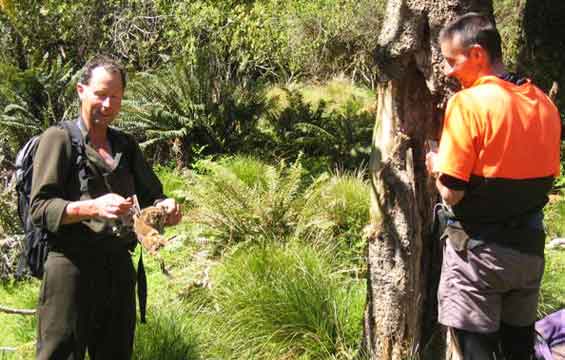 Learn about wapiti, the largest round horned deer in the world.

The Northern Fiordland Whio 'Security Site' located in Fiordland National Park is one of eight sites identified as a priority for whio management in the national whio recovery plan.