Fulton Hogan are working together with DOC as national partner to the Takahē Recovery Programme.

DOC and Fulton Hogan Ltd are proud to partner together in support of the Takahē Recovery Programme. The partnership was launched on 5 July 2016 at Burwood Takahē Centre, near Te Anau and is supported by the New Zealand Nature Fund.

The partnership with Fulton Hogan enables the Programme to build on past success. With a focus on ensuring the takahē are never again considered extinct and the support of Fulton Hogan, the Programme has been able to consider re-establishing wild populations of takahē.

Fulton Hogan’s support for this mahi reflects a shared interest in a sustainable and multi-generational future. It is a way for Fulton Hogan staff and families to connect with conservation and be involved with the recovery of one of New Zealand’s taonga species. 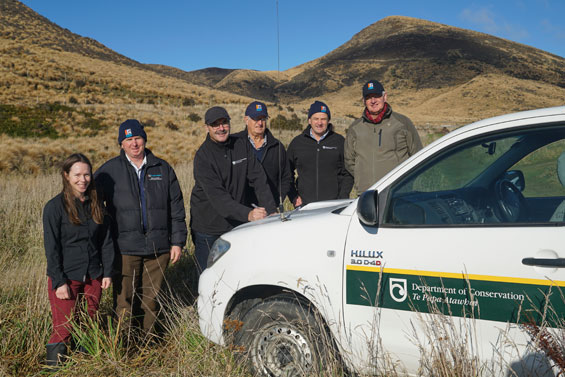 Takahē are a national treasure and a taonga species of Ngāi Tahu that need ongoing protection to ensure its survival. Takahē are native to New Zealand and are listed as a Nationally Vulnerable species, with birds located across New Zealand at secure mainland, island and wild population recovery sites.

The commitment from Fulton Hogan will help DOC and the Takahē Recovery Programme tackle the next big challenge for the recovery of the species – identifying ideal sites to establish new, large wild populations of takahē.

For the first time in more than 100 years, takahē will roam freely in Kahurangi National Park in an historic attempt to create a new wild population outside of Fiordland.

The New Zealand Nature Fund is a conservation philanthropy organisation, working with the private sector and individuals who are looking to invest money in New Zealand's natural heritage.