Skip to content
A ball is a good toy decoy
Image: Olivia Keane | ©

Keep wildlife safe by knowing where to look out for them while dog walking on beaches in the Tāmaki Makaurau/Auckland region.

Where to look out for wildlife

Birds, seals, and other wildlife are common on Auckland beaches. Here are four taonga species that are particularly sensitive so look out for them when out with your dog. For some of these species, they are so rare that dogs may not be allowed at some beaches. Check the rules for a beach before you go. 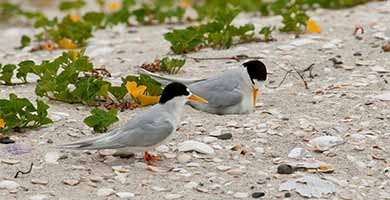 Tara iti often blend into their surroundings at a distance due to their colouring.
Malcolm Pullman | ©

The New Zealand fairy tern/tara iti is probably New Zealand's rarest breeding bird. Nesting in a small scrape in the sand, these delicate sea birds are very vulnerable. Nest sites are roped off and signs erected to alert people to the area.

Tara iti are so rare that they only breed in four locations all restricted to  the Northland Peninsula. Two of these sites are in the Auckland region:

The endangered New Zealand dotterel was once widespread and common. Now there are only about 2500 birds left, making dotterels more at risk than some species of kiwi.

In the Auckland region, New Zealand dotterel nest at a range of beaches including: 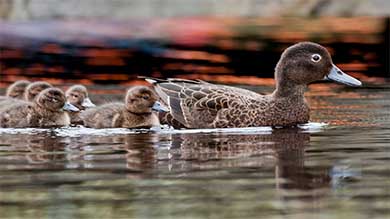 Pāteke are New Zealand's rarest water fowl. They have declined in numbers and range since the late nineteenth century. Pāteke were once widespread around New Zealand but due to predation, hunting, disease and habitat loss all wild populations declined and some populations went extinct.

There are currently estimated to be between 2,000 and 2,500 pāteke living in a wild state in New Zealand, making it New Zealand’s rarest waterfowl species on the mainland.

Photos of pāteke and more information. 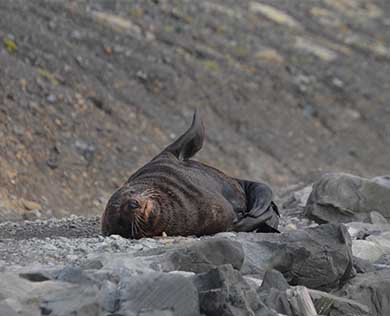 Fur seals breed and haul-out (rest) on rocky coastlines sometimes in large numbers. In winter you may see them as solo adventurers on the beach and on sides of a coastal track.

They blend into their surroundings. Your dog might smell one long before you know it’s there, so keep alert.

Kekeno are recolonising much of their former range. For the Auckland region this means numbers are increasing and they may turn up in random areas. One was found in a South Auckland car wash once.

But they are also becoming more common in places like:

Keep a look out for kekeno and leash your dog to walk past.

The key thing you can do is when you see wildlife ahead, put your lead on your dog. Then pass at least 20 meters away from the wildlife. This will help keep your dog and the wildlife safe.

More ways to keep wildlife safe when with your dog on beaches.

Get a Lead the Way lead

Lead the Way leads convey visually what temperament your dog has. By using these leads while out on walks, you're also advocating for the protection of our precious wildlife.

How to get a Lead the Way lead.

Find out dog rules and where dog exercise areas are for these areas:

Different conservation areas have different rules. Some areas allow dogs, others require a permit, and some do not allow dogs at all.

Tracks, campsites, and hunting areas you can take your dog on conservation land.