Kākāriki, meaning ‘small green parrot’ in Māori, are beautiful forest birds. They feed on berries, seeds, fruit and insects, and generally nest in holes in trees.

There are five main species of kākāriki:

Kākāriki are basically bright green in colour but can be identified by the distinguishing coloured areas on the head (although in the case of the Antipodes Island species, the head is entirely green).

The Antipodes Island parakeet is the largest species, followed by the red-crowned parakeet, which is in turn larger than the yellow-crowned and orange-fronted species.

The orange-fronted parakeet was long thought to be a colour variation of the yellow-crowned parakeet but is now confirmed as a distinct species. 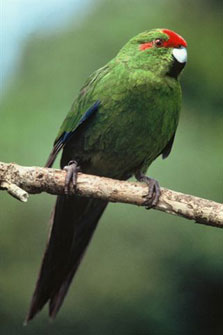 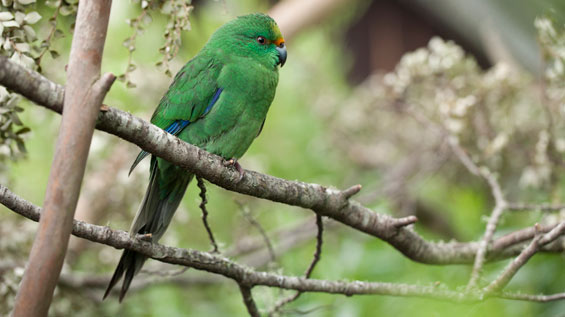 The yellow-crowned parakeet, although rare, can be found throughout forested areas of the North, South and Stewart Islands as well as the sub-Antarctic Auckland Islands. Yellow-crowned kākāriki prefer tall, unbroken forest and scrub.

The red-crowned parakeet was widespread throughout the mainland last century but today is very rare on the mainland and only common on islands free of mammalian predators.

There are a number of other sub-species of red-crowned parakeets that are found on various islands around New Zealand including the Chatham Islands, Antipodes Islands, Macquarie Island, Norfolk Island, Lord Howe Island and New Caledonia.

The red-crowned prefers to inhabit relatively open spaces in and around forest areas and frequently forages on the ground. It also prefers lower altitudes than the yellow-crowned species. The Antipodes Island parakeet occurs only on the Antipodes Islands.

Red- and yellow-crowned kākāriki are the only native bird species able to be held and bred in captivity. Breeders of kākāriki require a permit from the Department of Conservation. Captive breeding has contributed to the preservation of kākāriki, and captive-reared birds have been successfully liberated on Cuvier, Tiritiri Matangi and Whale Islands.

During the 1800s, kākāriki were common and at times flocks would emerge from forests to feed on grain and fruit crops. Farmers and orchardists considered them pests and shot thousands of the birds in an attempt to protect their harvests. Culling – as well as destruction of their old-growth forest habitat – were primary reasons for the birds’ near demise.

Today, attacks by introduced predators such as mustelids and rats are the main threat to kākāriki. Like other hole-nesters (for example, the yellowhead/ mohua and kākā), female kākāriki and chicks are vulnerable while they are in the nest since there is no escape route from predators that enter the tree hollows.

1080 poison is used to protect birds in New Zealand and to maintain the health of forest ecosystems.

In places where 1080 has not been used to stop rat plagues, entire populations of parakeets have been destroyed by predators.

Support your local DOC office in its efforts to control mammalian predators in habitats where kākāriki live. The protection of oldgrowth forest habitats and the reforestation of areas that have been previously cleared will also help protect kākāriki.

Red-crowned and yellow-crowned kākāriki are the only native bird species allowed to be held and bred in captivity. Breeders of kākāriki require wildlife permits from DOC.

Nic finds out how DOC staff in Canterbury are fighting the clock to save our threatened species of kākāriki.

This video journeys to Pukaha Mt Bruce, where DOC look after the orange-fronted parakeet/kākāriki karaka

Apply for a permit to hold, catch, handle or release wildlife.