Nature and history of Motutapu Island

Considered a sacred place by local iwi, Motutapu was intensively settled and cultivated by Maori. In more recent times, the island served as a base during World War II.

Viewed from the mainland, Motutapu in Auckland's Hauraki Gulf looks like a quiet haven from the bustle of New Zealand's largest city.

But it hasn't always been that way. During its varied past Motutapu has been intensively settled and cultivated by Maori, hosted Victorian picnic parties of over 10,000 people, and at times during World War II was a base for more than 1,000 military personnel.

The Department of Conservation's future management of the island as a public reserve will be guided by a Conservation Management Plan (the Tāmaki Makaurau motu plan) that will be jointly approved by Ngā Mana Whenua and the Auckland Conservation Board.

There are hundreds of archaeological sites as well as relics of the island's more recent European history.

Motutapu is much older than neighbouring Rangitoto Island, and completely different geologically and botanically.

A major 50 year community project to restore Motutapu's cultural and natural landscape was launched in 1992, aiming to transform the island into a mosaic of protected archaeological and historic sites, replanted forest, restored wetland and pasture.

Volunteers are helping to revegetate parts of the island. However, most historic heritage sites will be kept under grassland so that surface features are visible and subsurface remains are not damaged by tree roots. Historic buildings and structures are being maintained and restored.

Motutapu was declared pest-free in 2011 thanks to the successful removal of all pest mammals from both Motutapu and Rangitoto islands. This is a significant milestone in the Auckland Office's ambitious and exciting programme to restore these iconic islands in the Hauraki Gulf Marine Park.The restoration of these islands protects the world's largest pohutukawa forest, and provides a 3,800 ha environment that can now support some of New Zealand's most loved wildlife, including takahe and tieke/saddleback. Seven pests - feral cats, rabbits, stoats, hedgehogs, Norway rats, ship rats and mice - were eradicated from the islands between 2009 and 2011. This built on the successful removal of possums and wallabies from the islands in the 1990s, and the reforestation of parts of Motutapu. 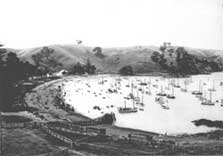 Boats in Home Bay in the 1900s, Motutapu Island

Motutapu is a taonga (treasure) with many special places. National reserves like Motutapu protect natural, historic and cultural heritage for all New Zealanders, and help safeguard the biodiversity of the planet. The tangata whenua of Motutapu have a spiritual, cultural and historical relationship with their taonga.

According to tradition, Motutapu was named after a place in the Polynesian homeland of the New Zealand Maori. The island is said to have been settled by the Maori ancestor Taikehu, who arrived on the Tainui canoe. It later became known by his descendants as Te Motu tapu a Taikehu, or `the sacred island of Taikehu'. Motutapu remains a place of special significance to the Tainui tribal confederation, and in particular to Ngai Tai.

Maori were living on Motutapu even before Rangitoto emerged from the sea some 600 years ago. The earliest settlement sites were blanketed with ash from the emerging volcano, and archaeologists have found the footprints of people and dogs preserved in solidified ash layers after Maori returned to Motutapu between eruptions.

The soils that formed on Motutapu from the ash showers were fertile and easily cultivated, attracting intensive Maori settlement. Today the landscape is dotted with sites of kainga (villages), pa (earthwork fortifications), kumara storage pits, former gardens, and middens (food refuse deposits). More than 300 archaeological sites are recorded, and there are probably many more yet to be discovered.

After centuries of Maori occupation, Motutapu passed into European ownership. Farming began on the island in 1840, and homesteads were established at Emu Bay and at Home Bay soon after. The settlers planted the tall Norfolk pines and other exotic trees which mark these farm settlement sites and stand as familiar landmarks on the skyline.

The last of the early farmhouses, a 1901 villa built at Home Bay for the Reid family, is preserved as a reminder of homesteads once seen on the shores of many Gulf islands.

Deer, wallabies, ostriches and other exotic animals were introduced to Motutapu as a visitor attraction by Robert Graham in the 1860s, and by the early 20th century the island had become a popular visitor destination. Home Bay was a favourite picnic spot.  On one day in 1903, ten steamers ran 15 trips from Auckland, transporting as many as 14,000 people to the bay.

During World War II, Motutapu, Rangitoto and other Gulf islands were fortified to defend Auckland Harbour from seaborne attack. 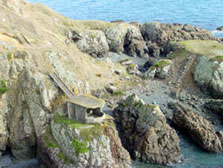 Between 1936 and 1944, military camps and barracks, underground ammunition stores, observation posts, roads, and a causeway from Rangitoto were built at a cost of more than £500,000. The Motutapu defences included a battery of 6 inch guns, and anti-aircraft, machine gun, radar, and searchlight installations.

The guns have since been removed, but many of the concrete emplacements and underground structures have been left as a reminder of the very real threat that New Zealand faced during the war. The military barracks at Administration Bay have also been kept, and are now an Outdoor Education Camp, run for school students by the Motutapu Outdoor Education Trust.

There are a number of roads and walking tracks to explore the island, which is joined to Rangitoto by a causeway built in WWII.

At 178 million years old pest-free Motutapu is one of the oldest land masses in the Hauraki Gulf. The island has lived an exciting life – it was intensively settled by Maori, it hosted massive Victorian picnic parties, and was a base during WWll.