The Waikite valley of the Central North Island is steeped in geothermal activity, and home to rare geothermal vegetation.

Waikite geothermal wetland is about 30 minutes drive south of Rotorua in the upper reaches of the Otamakokore Stream. The stream water is mainly supplied from geothermal springs and the entire wetland has a catchment of approximately 300 ha.

DOC has committed much resource into restoring vulnerable species in the area after grazing animals significantly damaged the area.

The geothermal areas which are part of Waikite include national threatened plant species including rare geothermal ferns and orchids. An area of soft fern (Christella sp. ‘thermal’) present around the Otamakokore Stream is considered to be one of the largest populations in New Zealand. The fern is ranked At Risk – Naturally Uncommon. Other thermal plants include prostrate kanuka (At Risk – Naturally Uncommon), Cyclosorus interruptus (At Risk – Declining) and thermal ladder fern (Nephrolepis flexuosa) (At Risk – Declining).

The area was first passed to DOC to administer in 1987 from the Department of Lands and Survey. Some of the geothermal features and other wetland values at the site were not captured in the protected area administered by DOC and were subsequently developed as part of the Waikite Landcorp farm. To increase productive grazing, drainage occurred and many sensitive areas were grazed. Much of the protected areas no longer had intact fencing and was accessible to stock resulting in grazing, pugging and trampling.

$90,000 from the Wairakei Environmental Mitigation Charitable Trust was received in 2007 for the purposes of protection, restoration and enhancement mechanisms. The planned work included riparian protection through fencing, enhancement and manipulation of hydrology, planting and protection of surface geothermal features through land exchange processes with Landcorp Farming.

Threatened plant monitoring across the site focuses on geothermal ferns. These native ferns are naturally uncommon and consequently at risk if the threats to them are not managed. A 2014 monitoring survey showed significant increases geothermal ferns including Christella, Cyclosaurus and Nephrolepis. This is due to the ongoing management work that DOC has undertaken at the site, in particular fencing and weed control.

In 2014, DOC received resource consent to build a bund to raise the water level in part of the Waikite wetland. By raising the water level, weed species such as blackberry can be smothered to enable geothermal ferns to increase in extent and maintain available habitat and to restore wetland water levels.

DOC rangers at work at the Waikite wetland

Off the beaten track, the Waikite Wildlife Management Reserve is tucked away from the reach of the general public. The area contains a significant wetland and the primary focus of DOCs efforts has been around plant pest control. Willow is an established plant pest which dominates native species in wetlands and forms vast sense strands and thickets. It causes blockages, flooding and structural changes in waterways which can have impacts on ecosystems.

Willow control started in 2012 and dramatic effects can be seen in the photos below. 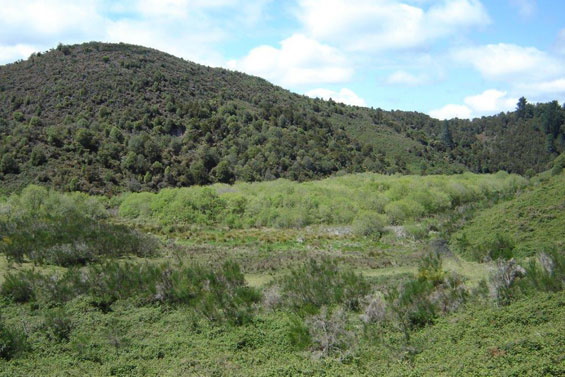 The Waikite Wildlife Management Reserve before, in 2012... 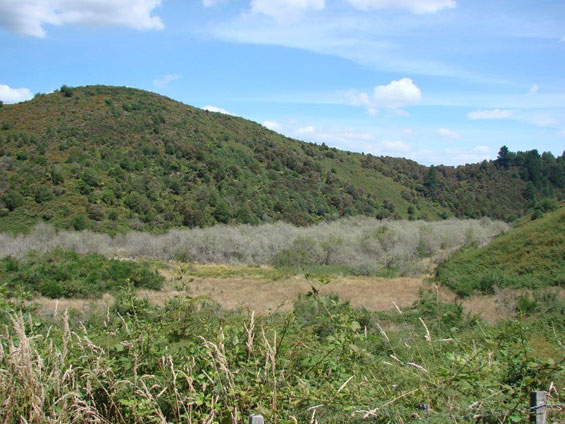