Mistletoe conservation in Bay of Plenty

The two species of green mistletoe or pirita – Ileostylus micranthus and Tupeia antarctica, grow throughout New Zealand, but in the Bay of Plenty they are known almost exclusively in the Rotorua district.

There are only a few currently known sites elsewhere in the Bay of Plenty such as Te Puke.

Locally these species are found in regenerating shrubland, often in areas with high light levels such as forest edges and road margins. Many of the populations are on private properties or in parks where possums may be less frequent.

In the Bay of Plenty Tupeia antarctica grows mainly on fivefinger and tree lucerne host trees. Ileostylus micranthus occurs mainly on mahoe and kohuhu but also on a range of exotic host species including willows around the Rotorua lakes. Populations are scattered with each population generally being highly localised with often a small number of plants present.

Beech mistletoes (known by various names including pirita) are found throughout parts of New Zealand, particularly in the South Island and are known for their masses of red or yellow-orange flowers in summer.

In the Bay of Plenty beech mistletoes occur on several species of native beech as well as tawheowheo. The dwarf mistletoes occur on kanuka, prostrate kanuka and manuka. They are most commonly known from near geothermal areas around the Rotorua District and near Kawerau but also occur in coastal scrub near Whakatane. 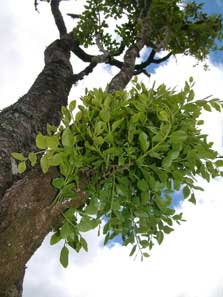 DOC has been undertaking ongoing surveys in various areas of the Bay of Plenty, especially around the Rotorua district and in Whirinaki Te Pua-a-Tāne Conservation Park to further determine the species, number and condition of mistletoe plants present.

Most of the population of green mistletoes in the Bay of Plenty occurs on private land. DOC has contacted all landowners with known mistletoe plants on their properties to inform them of the presence of these plants and to discuss options for management.

Ongoing advocacy has also been undertaken with other land managers and district and regional councils.

At Lake Okareka near Rotorua, Forest and Bird and the Rotorua Botanical Society supported by DOC and Environment BoP have been working since 2002 to protect a regionally significant mistletoe population in Lake Tikitapu Scenic Reserve by controlling plant and animal pest threats.

A national recovery plan has been published by DOC to coordinate conservation effort and ensure the long-term survival of mistletoes.

The short walk for the whole family provides views of the threatened native mistletoe.

This short walk through beautiful forest has information panels about plant and birds along the way - it's a great option for children.