Find out about the various community organisations that are also involved in restoration work in the Fiordland Islands.

DOC has managed most of the Fiordland island projects to date, including work on Secretary Island and Resolution Island. However, two community trusts have also developed their own ambitious projects:

Pomona and Rona Islands in Lake Manapouri have also been the focus of a comprehensive community-led restoration programme since 2006, funded through sponsorship to Pomona Island Charitable Trust. 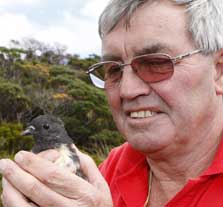 The NZ Government has funded DOC to establish the necessary infrastructure (tracks, huts, and radio communications) and to carry out pest-eradication on islands in Fiordland. In 2005 a $7 million funding package was announced for Secretary and Resolution islands. DOC’s work has also been supported by financial sponsorship from:

Many individuals and local operators have given their time to supporting this work including Deep Cove Charters Ltd., Fiordland Wilderness Experiences, Adventure Kayak, and Cruise Fiordland.

In 2007 The Fiordland Conservation Trust was established by the community to provide independent funding and resources to conservation projects in Fiordland and Southland.

Get involved with conservation groups working with DOC in Fiordland.