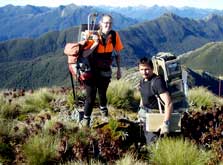 Restoration of these islands is largely focused on pest eradication and the subsequent translocation of threatened fauna. The first step is to establish a track network across each island in order to lay out stoat traps and improve access for hunting deer. Trapping techniques have been developed since the first stoat eradication was conducted on Te Kakahu / Chalky Island in 1999.

The most recent programme on Resolution Island has used stainless steel DOC 150™ kill traps as single-sets in a combination of wooden and wire tunnels. Over 2300 trap tunnels were laid out across a 200 km track network, yielding a density of one tunnel per 9 ha across the island. Traps were baited with a single hen’s egg and meat bait. A pre-baiting programme was undertaken before trapping commenced in mid-winter, when alternative food supplies for stoats would have been at their lowest.

Techniques for deer eradication are still being developed, but are largely based on a combination of helicopter- and ground-hunting for the initial knock-down of the population. A variety of additional techniques are used as deer numbers get low, including remote-monitoring of deer capture-pens, and self-attaching radio collars.

DOC programmes have been managed by permanent staff, often with a team of seasonal staff or contractors. The work has also benefited enormously from the assistance of volunteers. This arrangement has worked well: involving enthusiastic locals has generated a real sense of community ownership about the programme.

Each part of the programme follows DOC best practice. Operational plans are peer-reviewed, staff and volunteers receive appropriate training, and contracts are monitored closely to ensure the required standards are met. 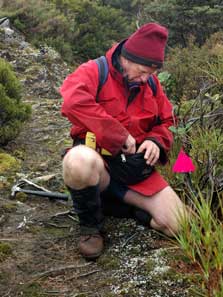 The Fiordland Islands Restoration Programme has been based on developing methods on small islands, and then applying them to larger ones. Another key to its success is that techniques used in the initial knock-down of pests have often remained in place as part of the ongoing monitoring programme. Control on the adjacent mainland for stoats is important in terms of minimising the risk of reinvasion.

Central to the ongoing success of this programme is ensuring that new pests don’t arrive on these islands. DOC’s activities on the islands are carried out in accordance with the Island Biosecurity Plan: Southland Conservancy. The Department also works with local operators to develop their own biosecurity plans for vessels and shore parties. 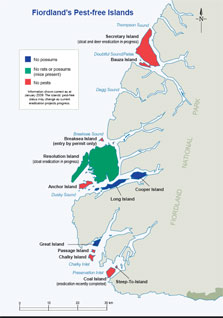 Tieke/South Island saddlebacks were rescued from their last outpost on Taukihepa/Big South Cape Island off Stewart Island following invasion of ship rats in the early 1960s. Following a series of translocations to small islands off Stewart Island, tieke were translocated from Big and Kundy Islands to Breaksea Island (in Fiordland) in 1992. From Breaksea Island, tieke have been translocated to Passage Island, Anchor Island, Bauza Island, and Te Kakahu/Chalky Island.

Similarly, mohua translocated to Breaksea Island from the Blue Mountains in 1995 have subsequently been translocated to Te Kakahu/Chalky Island, Anchor Island, and Pigeon Island. However, the mohua moved to Secretary Island came from the Dart Valley.