When compared to the adjacent mainland, the flora of Fiordland Islands is very diverse and relatively intact.

Compared to the adjacent mainland, the flora of Fiordland Islands is diverse and relatively intact, particularly on islands that have never had possums or deer present (e.g. Breaksea Island and Te Kakahu-o-Tamatea / Chalky Island). Plant species selectively browsed by possums on the mainland (e.g. Mistletoe sp.) thrive on islands where possums are absent. 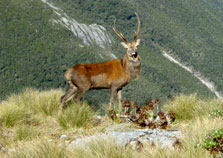 Introduced red deer colonised islands in Fiordland only in the last 50 years. Deer are good swimmers and reached all but the outermost islands (e.g. Breaksea and Chalky Islands).

The large numbers of red deer on Secretary and Resolution Islands caused significant changes in the composition and structure of the forest understorey.

Deer preferentially feed on species like broad leaf, mahoe, kamahi, five-finger, and hen and chicken fern. They also deplete the forest litter layer making it low in nitrogen and high in lignin. Invertebrate populations which rely on the forest litter for shelter as well as food have seriously declined.

In alpine areas deer selectively grazed large herbaceous plants, and some species are now absent. Deer also browse on the host plants of some invertebrates (e.g. the weevil Ectopsis ferrugialis which feeds on five-finger).

Following the initiation of deer eradication on Anchor Island in 2002 and Secretary Island in 2006, the return of many deer-preferred plant species has been observed. More sensitive habitats such as alpine grasslands will take longer to recover, and some plant species may never return without assistance.

Monitoring of vegetation changes at selected sites will enable identification of specific plant species that may need to be re-introduced in future. The removal of red deer should also benefit invertebrate communities with an increase in forest health and improvement in the quality of the litter layer.

Key introduced pest species targeted have included stoats (Mustela erminea), red deer, Norway rats, mice, and brushtail possums. One of the first sizeable island rat eradication projects globally took place on Breaksea Island in Fiordland in 1988. Since then over 13 islands totalling more than 31,000 ha have been targeted for pest-eradication in Fiordland. Many smaller stepping-stone islands have also been included as part of the ongoing monitoring and control programme.

Removal of pest species has resulted in whole-ecosystem benefits including increased forest health and the re-introduction of threatened bird species such as kakapo and tieke / South Island saddleback. DOC and the local community have worked together to protect and restore these islands. This work is ongoing with new island initiatives, public education, and a strong focus on island biosecurity to ensure that the islands remain pest-free.

Some islands have never had rats or mice present. Secretary Island is one such place and is particularly noteworthy for its diversity of large invertebrate species (e.g. knobbled weevil, tunnel-web spider, and the large land snail Powelliphanta fiordlandica). The Fiordland skink is also present on Secretary Island as well as on numerous other rodent-free islands in Fiordland.

Stoats are capable of swimming as far as 1200 m, and arrived on many of the islands in Fiordland from the 1890s onwards. They had a serious and significant impact on New Zealand’s native fauna. Ground-dwelling birds such as kakapo and kiwi, and cavity-nesting birds like mohua (yellowhead) were particularly affected. Several native bird species no longer present on the mainland in Fiordland have been reintroduced to islands that have had stoats eradicated.

An important part of this restoration programme is ensuring that these islands remain stoat-free through effective predator control on the adjacent mainland, and maintaining traps on the islands. These traps are currently checked three times a year.