The Northern Fiordland Whio 'Security Site' located in Fiordland National Park is one of eight sites identified as a priority for whio management in the national whio recovery plan.

The site is located in the northern part of Fiordland National Park. It contains four major river valleys (Worsley, Clinton, Arthur and Cleddau) and their tributaries, all of which are home to whio. 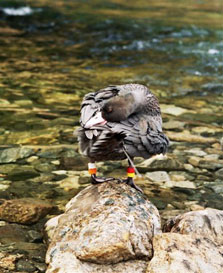 Colour bands have been maintained on known whio for identification purposes.

When the project began in 2000, five pairs of whio were protected and traplines covered 34 km of water. The number of ducklings hatching was close to zero

Over the 2010/11 season, nearly 80 ducklings hatched and the majority of these reached independence.

Floods during the nesting season can have a dramatic effect on nesting success and some years there is low productivity due to floods. The floods destroy nests and can wash young ducklings away from their parents.

Te Anau intermittently runs Whione (Whio Operation Nest Egg). This is the collection of eggs from the wild. These are then artificially incubated, hatched and reared. The resulting fledglings are released at approximately 12 weeks old into an area with sustained predator control.

The eggs are collected from the wild nests early enough in the breeding season to allow the pairs to re-nest and hatch and rear their own ducklings. We then have the potential to double production from those pairs.

The aviaries that we rear the ducklings in have been designed to teach them the white-water skills they require in the wild.

How can you help?

If you are walking the Milford Track or driving on the Milford Road, your chances of seeing blue duck/whio are good (if you look in the right places). You can assist DOC by reporting all sightings.

Provide essential information: Date, location, number seen. Any additional information about their sex, age (juvenile or adult, size of juveniles), or what they were doing would also be useful.

You can get sighting cards from DOC offices or send a report to the nearest DOC office.

Prevent the spread of didymo

Check, clean and dry your gear to prevent didymo from reaching the pristine rivers where whio live.

This project is funded by:

Find out how Genesis is partnering with DOC to extend its support for the Whio Forever Recovery Programme.