Working on the boardwalk on Anchor Island/Pukenui
Image: DOC

Corrections collaboration leads to walk on the wild side

A collaboration between the DOC and Ara Poutama Aotearoa/Department of Corrections has resulted in a new boardwalk for an important island in Fiordland.

A collaboration between the Department of Conservation (DOC) and Ara Poutama Aotearoa/Department of Corrections has resulted in the design, build and installation of a new boardwalk for an environmentally important island in Fiordland.

Anchor Island/Pukenui, in Dusky Sound, is a vital location for DOC's efforts to protect a number of threatened native birds and is a key site for the Kākāpō Recovery programme. The island has no mammalian pests, is a harsh environment, and can only be accessed by boat or helicopter.

The challenging terrain of the island makes it difficult for rangers and scientists to move about without disturbing the fragile environment and the tāonga bird and insect life of the island. 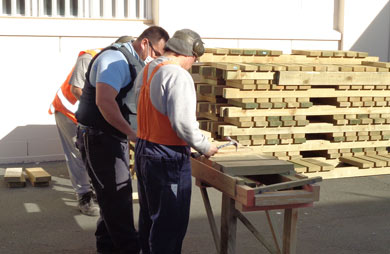 Constructing sections of the boardwalk
Image: Department of Corrections

The more than 600 m of new wooden boardwalk was designed and constructed by men at Invercargill Prison and targets some of the muddiest and most rugged sections of track, improving accessibility for those working in the conservation sector who visit the island.

Ten prisoners have been involved in the project, designing and building the lengths of boardwalk and gaining practical carpentry experience on the way. The men assembled 238 x 2.6 m long sections of boardwalk from treated timber and packed them into shipping containers.

"We're very impressed with the quality of the sections they've built for us, and really pleased we've been part of a project which has helped the men learn and use their construction skills," he says

The sections were treated again before leaving the mainland, to ensure no pests (like cluster flies) would be introduced to the island. Boardwalk packages were weighed and made up to 750kgs before being strapped ready for transportation from Bluff by boat, then lifted into position on the island by helicopter.

During the project, Alex Webster and Kākāpō Infrastructure Ranger Galen Davitt visited the prison and spoke with the men about Pukenui (Anchor Island) and the Kākāpō operation.

Invercargill Prison Manager Industries Roger Leslie says the rangers' talk was very informative and extremely well received by the men, offering them a good understanding about the purpose of their work.

Invercargill Prison has a good working relationship with DOC, and Roger says this project has positively highlighted the great benefits of this inter-departmental cooperation.

"This project fits well with our industries goal, to teach the men in our prisons practical skills for employment on release," says Roger Leslie.

"This project was undertaken with great enthusiasm by the men involved," he says. "They have greatly enjoyed the learning experience and taken real pride in the finished product. Several of the men have even expressed a desire to visit Anchor Island one day and see their work as a finished product."

"Having the men in the prison involved in something constructive and meaningful for our country, taking pride in the environment beyond and talking about their plans beyond prison is a particularly good sign of their engagement," he says.

Roger Leslie has also been hooked by the project, saying he'd like to go to Pukenui himself some day to assist as a volunteer on the island.

Alex Webster says the physical installation of the boardwalk section was "an amazing team effort" involving DOC staff and a group of local volunteers. The installation took just eight days, including laying the boardwalk, driving in pegs, overcoming obstacles such as rocks and tree roots; with those involved working 10-hour days to get the job done.

"Without staff and volunteers from across districts, and the contribution of the men at Invercargill Prison, this project would probably not have been feasible for DOC teams to undertake," he says.

"It has also been a great chance to share skills and knowledge, trips such as this are a great learning opportunity."

The project is part of the Good to Grow partnership between the Department of Conservation and the Department of Corrections which began in 2015 and has now expanded to wide ranging environmental projects throughout the country. All activities support DOC and community conservation projects and initiatives that have limited or no funding and require additional support.