Tongariro Alpine Crossing opening will depend on volcanic activity

The Department of Conservation says it is working to re-open the tracks and huts on Mount Tongariro as soon as conditions become safer and the extent of damage can be assessed.

The Department of Conservation (DOC) says it is working to re-open the tracks and huts on Mount Tongariro as soon as conditions become safer and the extent of damage can be assessed.

But DOC says it is too early to say when trampers will be allowed back on the popular Tongariro Alpine Crossing.

DOC staff have today flown over the site of the eruption on Mount Tongariro with GNS experts to get their first look at the aftermath of the volcanic eruption.

Story continues below the image 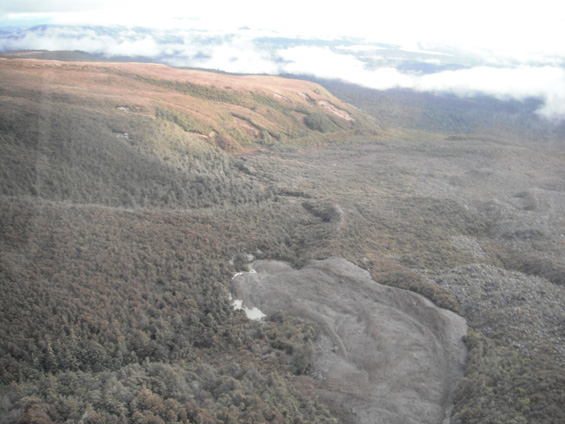 Debris flow below the eruption

Staff used the flight to check the damage caused to the Ketetahi Hut and the Tongariro Alpine Crossing track.

He says tomorrow at 8am DOC will reopen the Tama Lakes track from Whakapapa Village to Waihohonu Hut and also the Taranaki Falls loop.

“This will open a trans alpine walk which includes some of the most visited day walks in Tongariro National Park. It will be good to get people back into this part of the park.“

However, the main Tongariro Alpine Crossing track, which in parts passes within a kilometre of the eruption site, will remain closed for the time being.

“We need to be satisfied the volcanic threat has eased before this track re-opens and we will take advice from the GNS experts on this.

“We are keen to get people back onto the Tongariro Crossing but we need to make sure the volcano has settled down first.”

Nic Peet says debris from the eruption has dammed three small tributaries of the Mangatipua Stream and DOC in conjunction with GNS need to check the risk this water build-up poses to downstream bridges and culverts. DOC also faces significant work in assessing the damage to the track and Ketetahi Hut.

Nic Peet says today’s inspection has confirmed the impact of the eruption is localised to Mount Tongariro within the Tongariro National Park.

Mt Ruapehu and its skifields are unaffected by the eruption and checks on the Tongariro River indicate little impact from the ashfall.