Tawa, a fostered takahē chick is entertaining visitors and proving that life is good at the Te Anau Wildlife Centre.

Department of Conservation (DOC) staff recently completed the first health check on a critically endangered takahē family, confirming that life at the Te Anau Wildlife Centre is certainly suiting Tawa, the youngest member of the family.

“This is the first time we have had a young takahē chick on display at the Wildlife Centre, so we have been keeping a close eye on its progress,” said Glen Greaves, DOC takahē ranger. “From regular observation we were confident that Tawa was growing fast, but were delighted to have this confirmed with the takahē’s first health check.” 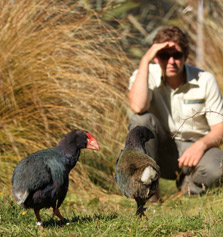 Mr Greaves said an average four month old takahē would weigh approximately 2 kilograms and grow to an adult weight of 3 kilograms at one year of age, but Tawa came in at a whopping 2.4 kilograms. The chick is also well on the way towards getting its adult feathers, and is developing the typical red colouring in its beak.

The takahē family are proving a popular attraction for both locals and visitors to Te Anau. Tumbles, Kawa and their foster chick Tawa were introduced to the Wildlife Centre in December and have quickly become accustomed to their new surroundings. They can frequently be seen out in the open, unaffected by a constant stream of visitors, including locals keeping a regular eye on the progress of Tawa. 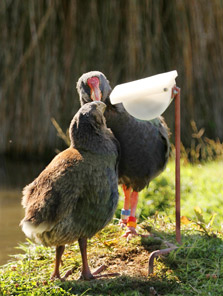 For many years the Wildlife Centre had only one or two adult birds, surplus to the Takahē Recovery Breeding Programme. However the support of Mitre10 Takahē Rescue and changes to the breeding programme at nearby Burwood Bush Takahē Rearing Unit prompted DOC to consider introducing a pair of birds and a foster chick.

“We know how important it is to Te Anau to have takahē at the local wildlife centre and its proximity to Burwood Takahē Rearing Unit means we have the added bonus of being able to use these takahē to foster a chick,” said Mr Greaves.

Mr Greaves said the successful fostering of Tawa by Kawa and Tumbles gave DOC the confidence to continue and possibly expand the takahē breeding programme at the Wildlife Centre. A second chick may be introduced to the takahē family within the next few weeks, he said.