The completion of two new solar power systems, providing cheaper, cleaner and quieter electricity at Department of Conservation bases on Great Barrier Island, is being marked at a launch event today.

The completion of two new solar power systems, providing cheaper, cleaner and quieter electricity at Department of Conservation (DOC) bases on Great Barrier Island, is being marked at a launch event today.

Installed by infrastructure company Vector, the new solar power systems cost $500,000 and provide electricity for DOC bases at Port Fitzroy and Okiwi. Power at the two sites, where 11 DOC staff are based, had been provided by four diesel generators. 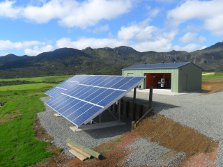 The new solar power systems have been installed as part of DOC's sustainability programme. This aims to halve DOC’s use of diesel to generate power - at places like Great Barrier Island that are not on the national electricity grid - by converting to renewable energy systems such as solar power.

The system is expected to reduce DOC’s diesel consumption on the island by up to 80%, and will save the Department about $45,000 a year. In addition, the lower maintenance required on the new diesel back-up generators - two of the old Lister generators had clocked up an impressive 125,000 hours each - will free up staff to work on other conservation priorities.

An added benefit of the new systems is how quietly they run in comparison to the generators.

“Visitors to DOC’s campground at Akapoua Bay are enjoying the peace and quiet now that the old diesel generators at the DOC workshops have been switched off,” says Mr Brandenburg.

DOC staff living in houses at Okiwi station are not only celebrating the demise of the noisy generators, but also the improved supply of electricity the solar system provides.

“With the diesel generators, the system would fall over if they all ran their vacuum cleaners and washing machines at the same time. They even avoided everyday appliances such as toasters and jugs to conserve electricity. Now the supply is much better and our staff can join the 21st century,” says Mr Brandenburg.

“We’re pleased to be providing solar systems that will provide cheaper, cleaner and quieter power for DOC at a location that is quite remote,” says Simon Mackenzie.