“Seals usually need rest, not rescuing” is advice from the Department of Conservation in response to calls from the public about young seals onshore at this time of year.

“Seals usually need rest, not rescuing” is advice from the Department of Conservation (DOC) in response to calls from the public about young seals onshore at this time of year.

Calls were received this week about a seal in a seaside driveway in the Christchurch suburb of Sumner, which after a rest, returned to the sea of its own accord, says DOC Biodiversity Programme Manager Robin Smith.

“We ask people to leave seals alone and they will usually return to the water once they have rested.”

It’s common, between August and November, for newly-weaned New Zealand fur seal pups and juveniles to come ashore to rest, before heading out to sea again to forage for food.

They may look distressed or scrawny but are usually fine and are just learning to make their own way in the world, says Smith. 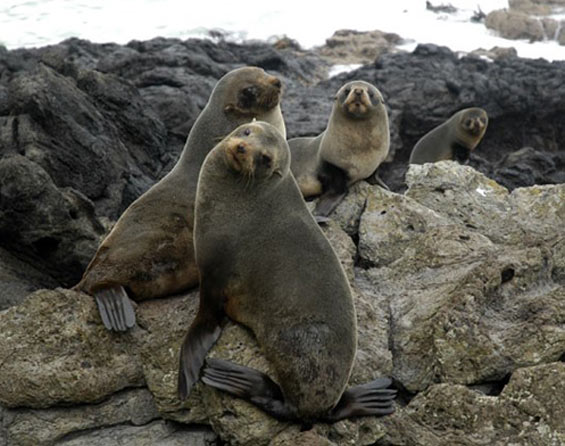 Seals on the rocks on Banks Peninsula

“Sneezing, coughing and regurgitating are normal behaviour for seals, as are weepy eyes, which are a natural mechanism to protect them.”

While they may look cute and harmless, seals are wild animals and will defend themselves if they feel threatened.  They carry infectious diseases and can cause serious injuries.  You should keep at least 20 metres away and not get between the seal and its escape route to the sea.

DOC has a hands-off policy with seals and only intervenes if the seal is severely injured, entangled in marine debris, being harassed by people or dogs or in a dangerous place such as on or near a road.  In these cases call the 24-hour 0800 DOCHOTline (0800 362 468).

If you encounter a seal on or near a beach please leave it to rest:

The seal population in New Zealand is estimated at 50,000-60,000 although this is probably an underestimate.  Prior to human arrival, there were about two million seals.  Seal populations around the country appear to be recovering apart from some colonies on the West Coast.  Anecdotal evidence points to an increase in seals around Banks Peninsula.